Heroes step in with hurricane help 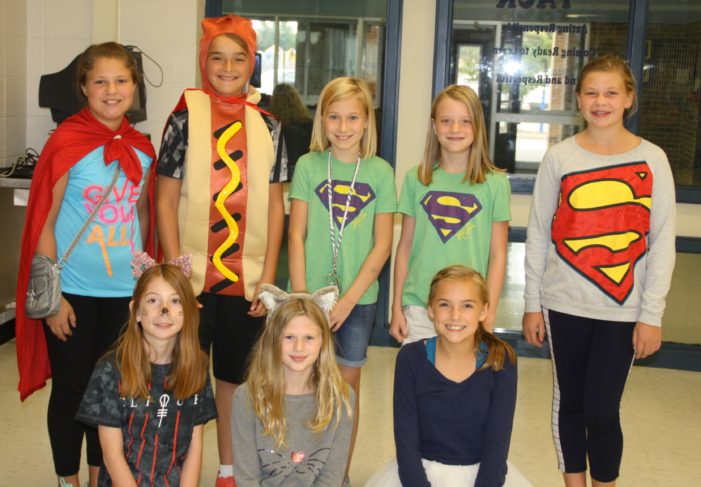 Texans and Floridians flooded by recent hurricanes need as many heroes as they can get. Clarkston students are stepping
up to help.
“We’re wearing superhero shirts, like Ms. (Liz) Walker is, today, because if we bring in a dollar it will be donated to the pet foundation and then it’ll help the pets that’re trapped in their cages and stuff in Houston,” said Jovona Mammi, seventh grader at Sashabaw Middle School (SMS).
SMS adopted two middle schools in Houston and are currently collecting supplies.
“I just counted over 40 boxes of food, school supplies, hygiene products, and we’re continuing to collect until the end of September and then we’re working with FedEx to help us and other area businesses to sponsor boxes and help us ship that to our schools,” said Principal Walker.
Students were able to pay a dollar towards hurricane efforts and dress like an animal or superhero on Sept. 13.
Walker said they raised over $900 for animals affected by Hurricane Harvey. The students also wrote letters of empathy to students at the adopted schools for support.
“They all seemed really excited to be able to connect with another student through the letters. Most of them wanted them to write back, have little pen-pals. And they were excited that they were going to be able to help in a big way,” SMS Science Teacher Andrea Lockwood said.
“They weren’t preparing for it, it just hit them and now they don’t know what to do and they’re stuck in a really, really awkward and bad situation,” seventh grade student Lavory Roy said of the hurricane victims. “Nobody really deserves that.”
SMS is accepting donations through Sept. 30 of snack foods, boxed mixes, breakfast items, noodles, rice, personal hygiene items, school supplies and Walmart and Target gift cards.
Third graders at Pine Knob are also donating money to the Hurricane Harvey Relief Fund.
The students held lemonade stands, sold tacos, toys, cider and donuts, and returned bottles to raise money. Third grader Braeden Covintree raised more than $430 in bottle returns. The students collected a total of $2,373.28.
Independence Elementary students are collecting school supplies for children affected by Hurricane Harvey, spearheaded by the fifth-grade classes.
Leadership students at Clarkston Junior High are raising money for hurricane victims, with Michigan State and the American Red Cross. So far, they’ve raised over $400 through donations and a bake sale.
“We love to see our students adopt a service-oriented mindset. We are awed everyday by their altruism, caring hearts, and generosity,” Superintendent Rod Rock said of these district efforts. “As a school system, we recognize this community value and understand that it has tremendously positive social, emotional, psychological, and physical benefits for our kids, for life.”