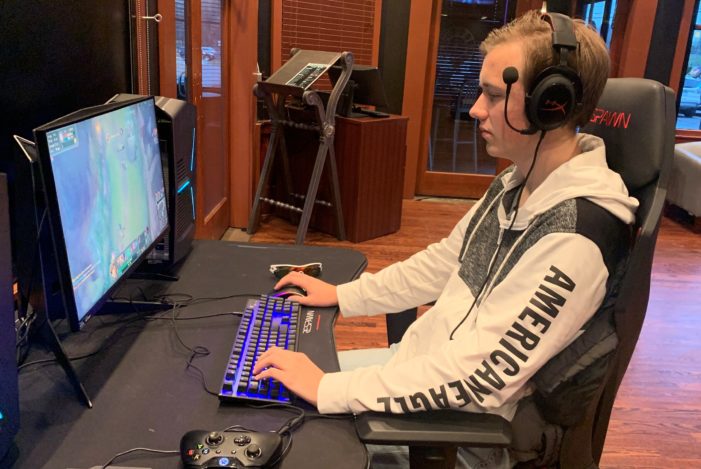 There’s a new team in town, and the Clarkston High School Esports team boasts the top video game players in the school.
Formed earlier this month, co-coaches Ron Conwell and Tamera Conwell held tryouts at GameTime in Auburn Hills and selected 18 kids, freshmen through seniors, including alternates.
Tryouts consisted of kids playing League of Legends, Rocket League, and Smash Brothers against one another and the top scorers making the team, which is considered a club sport at CHS. A total of 56 kids came to the interest meeting.
Those who didn’t make the main team have formed a smaller club and will compete against one another before, hopefully, acquiring the skills needed to move up to the main team next year.
“We have a good mix of kids,” said Ron, also the CTE subject area coordinator at the high school. “Some play other sports in other seasons. The students on the team come from all walks of life within the student body.”
“There will be a lot of college exposure for colleges that have esports teams,” added Tamera, a special education teacher at CHS. “This is growing, and there are a lot of colleges that have these teams, so it’s appealing to a lot of these kids.”
Clarkston will play Oxford High School, Lake Orion High School, Ferndale High School and University High School in Ferndale in the five-team esports league that starts play in December.
With video games a hot topic among kids and their parents, Ron said, “it’s all about moderation.”
“I think that’s how we learn about everything,” he said. “If you played soccer for 20 hours out of the day, it’s not going to be good for you. All things in moderation, the esports, if you’re good at it, you’re going to want to play it. It’s nice in the fact parents can look at it and see there are actually some good attributes coming out of it. You as a team are going to win and competing for the school, which also increases that exposure.”
Tamera said having an organized, structured team helps, too.
“This helps these kids work together as a team rather than being at home all by themselves,” she said. “It increases the socialization and the idea of them competing as a team at large and helps with problem solving within their own individual games.”

Junior Rick Hutchinson, who is on the Smash Brothers team, is excited to see the esports team come to fruition. The Smash Brothers team and League of Legends team have five players and two alternates each, while the Rocket League has three players and one alternate.
“I think this is awesome,” Hutchinson said. “My main passion in life is video games, and I want to be a competitive player when I grow up. This is a great way to get into it. You’re with your friends, and you can make new friends. It’s great practice to becoming a competitive player and with the experience overall, I love it.
Like most sports, the esports team can only get better with practice.
“You’re practicing to gain individual skills and then for the strategy as a team,” Ron said. “With League of Legends, you could be the best individual player, but you’re not going to win unless you have a great group of players who are working with you. The strategy you put together as a team is critical to your success. It’s similar with the other games, too.”
December and January will see all league matches at GameTime. The league championship match is scheduled for Jan. 21, also at Game Time.
The first match is against Oxford on Dec. 3, 4:30 p.m.
“It’s a short season, the first season, but hoping word gets spread around and this starts to grow,” Ron said. “Hopefully, other schools start jumping in and make it a little bit more of a lengthy season and get more kids involved.”