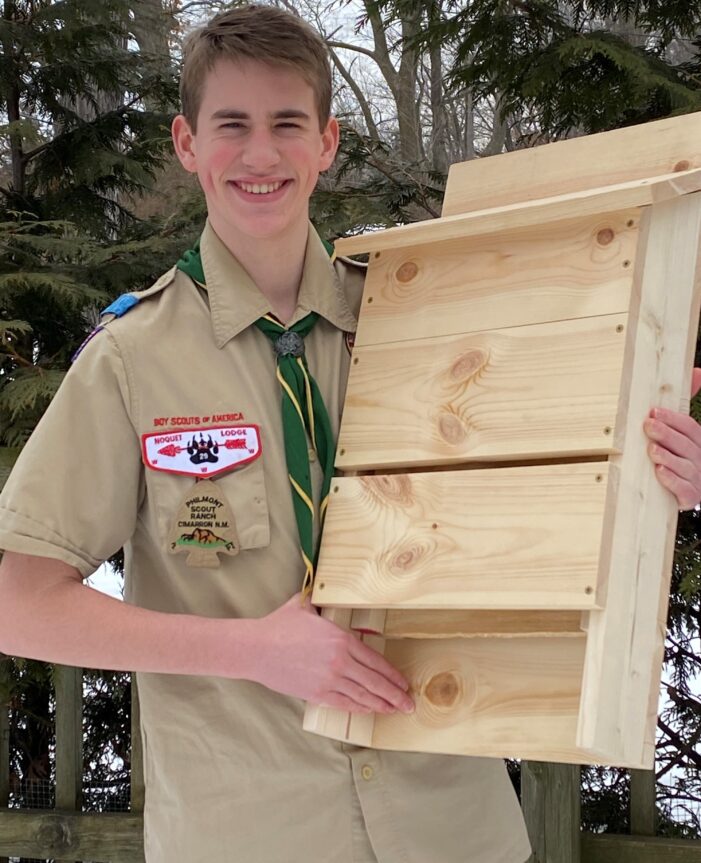 Kids speeding through the monkey bars and dipping under the slides, their screams and giggles collide with the sound of bikes ripping through the trails and the loud pop of potato chip bags opening at picnic tables.
It is a beautiful, sunny and 85-degree day at Depot Park, smiles all around only interrupted by the stinging sensation of mosquitoes’ non-stop nibbling.
Andrew Herrmann, a junior at Clarkston High, found interest in the town’s beloved park. Searching for a cause he could believe in, the teen found himself at a meeting with the Friends of Depot Park back in the summer of 2019.
There, they discussed the hassle and harassment the bugs caused at the park and together, they came up with a solution Herrmann was the perfect fit to solve – bat houses.
“Bat houses are installed in areas where mosquitoes and other insects are burden,” said Herrmann, who built the bat houses for his Eagle Scout project and will install them this spring. “Depot Park has many popular events throughout the year, and it is important to help control the mosquitoes and insect population to make it comfortable for the residents who visit the park.
“Bat houses are an inexpensive way to control insects instead of using chemicals.”
Herrmann joined the Boy Scouts in kindergarten and his love of hiking, camping and really anything outdoors grew rapidly. Thanking his parents for supporting him and crafting him into the man he is becoming, Herrmann placed a large emphasis on his father’s involvement with the scouts, crediting that with his dramatic strides within the group.
Herrmann is also a member of the Clarkston High Symphonic Wind Ensemble as well as the marching band, where he plays the trumpet. He also enjoys skiing in the winter and mountain biking in the summer.
Since gaining approval from the Boy Scout Council, Herrmann has began construction on the first of the bat houses, which will be raised anywhere between 12-20 feet off the ground. There, they will host the bats and be in a convenient area to feed the bats, as well as clear out the nagging bugs of Depot Park.
Once the model is approved, the entirety of Troop 189 will work with Herrmann and complete the rest of the bat village.
This final Eagle Scout project is just the exclamation mark on Herrmann’s time as a scout.
“Scouts taught me self-confidence, ethics, leadership skills and to be a good citizen in my community,” he said.
Herrmann plans to attend college to study Environmental Science and Geology.