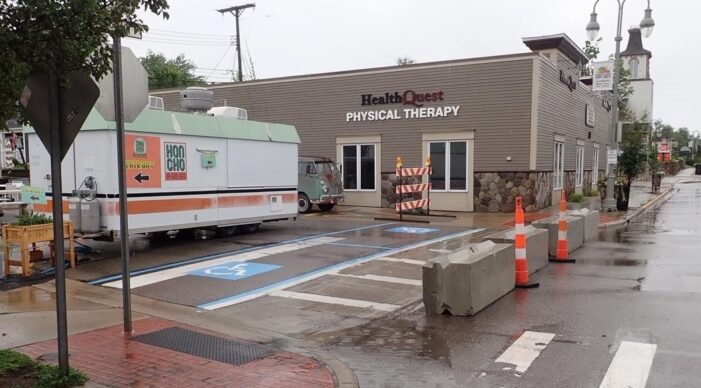 After getting city council approval earlier this summer to close East Church Street and provide outdoor seating, Honcho has placed barriers near Main Street and taken away two handicap parking spots.
According to Clarkston City Manager Jonathan Smith in an email obtained by The Clarkston News, the change was made for safety reasons.
“Oakland County Sheriff Lieutenant Todd Hill contacted me this week, recommending a change to the E. Church road closure barriers,” Smith said. “He was concerned that northbound drivers – possibly not realizing that E. Church Street is closed – could initiate a right-hand turn before seeing the barriers and may not be able to stop in time. He recommended that we consider eliminating the two handicap spaces and move the concrete barriers to the outside (west) edge of the sidewalk, reducing the potential for an accident while increasing pedestrian safety. I discussed this recommendation with the owners of Honcho, but the ultimate decision to make this change was the city’s.
“We are still evaluating if replacement handicap spaces need to be established. The only nearby place for such a designation would be on Main Street (as a non-van accessible spot), but this will require preapproval from MDOT.”
Clarkston resident Cory Johnston voiced his displeasure in a Facebook post.
“The entire issue of accessibility and ADA compliance is something that has long been neglected by the city and businesses,” Johnston said.
“I have raised the issue, citing specific violations, for years but little is done about it. Granted, the older buildings can be difficult to retrofit but since few in power demand it, or do so themselves, it doesn’t happen.”
Johnston noted that violations can be filed with the state and federal government.