Hyper-realism is name of the game for slot-car racer 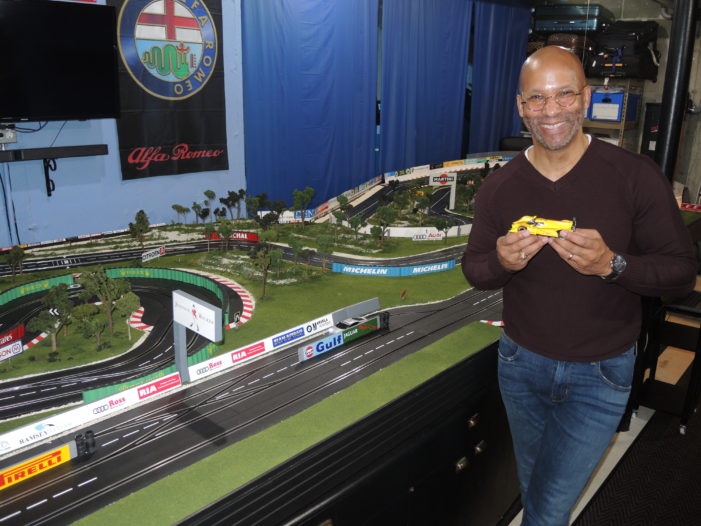 Hidden in Anthony Ramses’ basement is a highly detailed slot-car race track, which he built himself. Photos by Phil Custodio

BY PHIL CUSTODIO
Clarkston News Editor
Anthony Ramses of Independence Township feeds his need for speed on his hand-built 264-square-foot slot-car race track in his basement.
“This is my a man cave, my big boy hobby,” said Ramses, who moved to the Clarkston area with his wife, Marvella, three years ago from Bloomfield. “I work hard, and I do this to relax and escape. The guys come over and we race.”
With technical assistance and tools borrowed from his friend Lance Thomalson , Ramses embedded a 33-by-8-foot Carrera Digital race track into a woodframed table top built up with foamcore and wired by hand, decorated with styrofoam, plaster, aquarium sand, model-railroad landscaping, and trees made from bushes from his own yard.
“I watched a lot of model train videos, and put my own spin on things,” he said. “It’s all designed to replicate real racing on a 1:32 scale.”

As a digital track, racers can use their wireless controllers to make the tiny cars change lanes as they speed down the 140-foot track. His fastest lap time so far is 12.3 seconds.
“Friends have started this, too,” he said. “We race for 5-6 hours. It’s really competitive.”
Drivers have to watch their speed to avoid flying off curves, and also have to keep track of “fuel” consumption.
“When it uses fuel, the car becomes lighter. When it starts to run out of gas you have to have a pit stop,” he said. “If there’s a crash, the emergency car comes out and the track goes into safety mode.”
Growing up in River Rouge, Mich., he has always been a fan of racing but didn’t get into slot-car racing as a kid.
“I had a train set, but it was nothing like this. My mother threw it away when I went to college,” he said.
He saw a video on slot-car racing on Youtube last year and loved the idea.
“I got a small set and it grew, taking up most of the carpet,” he said. “That’s when my wife stepped in. The question was where to put it – I put it in the basement mechanical room with the furnace.”
It took about a year and a half to buy about $15,000 in track, racecars, and material, and put it all together. Work continues, with plans for more trees, shrubbery, and flowers to add color.
“I like the feel of real racing. It’s really kind of cool,” he said. “It’s make believe, but it takes a lot of effort. I like creating the diorama. It’s a lot of fun.”
Tinkering with the cars, experimenting with tires, motors, and other components is a big part of it, he said.
“It’s a whole lot better than video games,” he said. “The beauty is it’s an exact replica of the real things.”
He’s a pastor at Kingdom Living Church in Grand Blanc and an empty nester with his wife, with four grown children.
“They thought I was nerding out. I’m a nerd by nature,” Ramses said. “When it was finished, they were like, ‘Wow, you were serious.’”
One of his hopes is to get others interested in the hobby. He has a YouTube channel, “Anthony Ramses,” with videos of his track, including first-person racing shots made with tiny cameras mounted on the cars.
He is also featured in the July-August edition of Model Car Racing magazine in the article “Ultimate Digital Race Track,” and is working on a business idea to build custom-made slot-car track stanchions with advertisements on them.