It’s Monday morning. I’ve gotten to the office an hour early. It’s 7 a.m. I opened up the shop, turned the lights on, made the week’s first pot of coffee. This is a good part of my Monday routine.
Silence. No one here to ask questions, look for solutions to problems; nobody in need of any kind of assistance . Just me. I have about 56 minutes before we open for business and to have what I like to call my weekly, “Don’t Rush Don Column Writing Time.”
Breathe deep. Clear mind. Become one with the pencil. See words on the yellow, standard ruled legal pad. Ohmmmmmmm . . . . 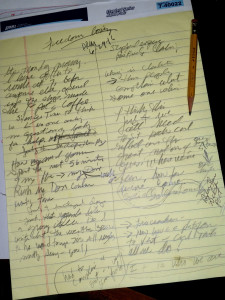 * * *
This weekend is a holiday weekend here in the good ol’ U. S. of A. and, to top it off, it’s a three day holiday weekend as July 4 falls on a Monday. (By the way, the weather looks to be about perfect for this weekend: mid-to upper 70s, and mostly sunny, with a 30 percent chance of rain only on Saturday.) And, since this edition of Don’t Rush Me falls prior to the weekend, I think an Independence Day column is called for.
Independence Day. What does it all really mean? I mean, come on, is it just about fire crackers and sparklers? I think we — every one of us ever-lovin’ Americans — need to sit back and think on July 4. Reflect on this great nation of ours; about the Founding Fathers and what was going on under their white wigs; about where we have been and how far we have come, both emotionally and socially.
Is there an inherent “American” trait — a disposition that sets us apart from our human counter parts in other parts of the world?
Some will opine the American Virtue is based on higher characteristics . . .
Valor?
Generosity?
Creativity?
Ingenuity?
Those traits can be argued when speaking about Americans. But, for me, I think what sets us apart from the rest of humanity is this: We are world-class, top-notch, A-Number-One complainers. Nobody is better at moaning and groaning than we salty Americans.
In times of turmoil the British have their stiff upper lips; the Irish laugh, their eyes still smiling, but we Americans? Our lips pout and our gums flap.
That is not a bad thing. We were not like sheep, blindly accepting and bowing to kings and queens and elite politicians. We complained. We whined. We didn’t like taxation without representation, so we dumped lots of tea into the harbor and commenced to break away from the world’s toughest blokes at the time and freed ourselves from the shackles of an oppressive and unresponsive, tyrannical government.
If minorities in this country would not have complained, would they have earned their civil rights? I don’t think so. They complained, they whined, they fought for their rights. Like Welsh poet Dylan Thomas espoused, Americans will not go quietly into the night, damnit!
We whine.
Our right of passage is this: Where there was injustice, we whined. Today we carry on and have taken that noble disgruntlement to an entirely different stratosphere, one our forefathers and mothers, aunts and uncles could not have imagined.
In our country’s history, we backed up our complaining with a revolution, protest marches and sit ins. Now we have social media and our whining will not go unheard! We will not just complain about injustices, we will whine about any danged thing we want!
* * *
Not too long ago, in a joking response to the happy-happy, hearts and unicorns, Stepfordesque Facebook page, Positively Clarkston (now boasting 6,000 members), a group of whiners started their own page. They wanted a place to vent, get stuff off their chests — a Facebook page of their own to unburden their sarcastically bent minds. While they could complain in letters to the editor, with the new social media platform they can (and often do) use color metaphors to help punctuate their points.
Do they complain much? Oh, hell yes they do. They complain about firecrackers and loud motorcycles; they whine about people who complain about firecrackers and loud motorcycles.
It’s entertaining good fun!
* * *
This July 4, when you salute Old Glory or sing God Bless America, take a moment to reflect on your heritage. Think about being a good American and complain about something. Amen.

July 4 thoughts: All good Americans should whine added by Don Rush on June 29, 2016
View all posts by Don Rush →

One Response to "July 4 thoughts: All good Americans should whine"