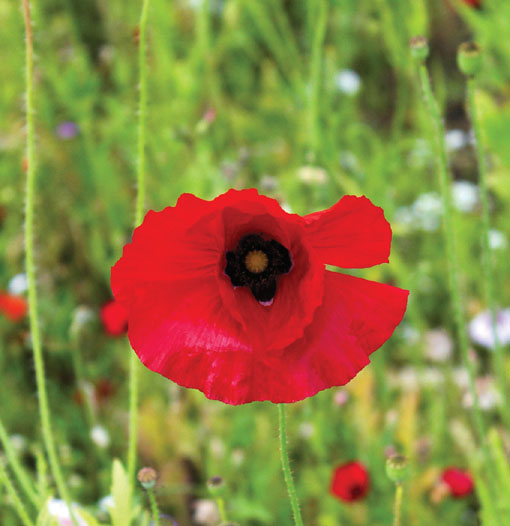 Monday was Memorial Day. Now that we are all back to home and work, and since everybody else wrote about Memorial Day before Memorial Day, I thought I’d do it differently. I’ll do mine after Memorial Day! I first ran this column in 2003, and since then – every year around this time – some folks request I re-run it. I usually oblige.
* * *
“Poppies! Poppies! Poppies!”— Something the Wicked Witch of the West may have uttered in the 1939 movie classic, “The Wizard of Oz”
* * *
Quite simply, I know the day we remember those who died in service to this country is upon us because I replaced the dusty and faded red paper poppy that hung from my rearview mirror for the past 12 months.
In towns across this nation, graying and weathered veterans don their uniforms to stand in roadways and in front of stores to sell paper poppies. Monies raised from these sales and those made by the wives and daughters of veterans help different veteran causes (not to stock the bar with booze as I have heard some speculate). So, I always feel obligated to pull out some green backs, purchase a poppy and say “thank you.” There’s been a red paper poppy somewhere in every vehicle I have owned over the years.
Come to think of it, Pops Rush, my dear and departed father, always had one in his car, too. At any rate, I always kinda figured it was a fund-raising gig, but I never — until now — researched the origins of the red poppy tradition. And, since I invested a finite amount of my life into this research, you too must suffer or be enlightened — choose your pick. Regardless, we’re taking this ride together. There is no escape.
* * *
Legends of poppy fields popping up over battlefield are reported from the time of Genghis Khan, through the Napoleonic wars and up until the first World War. Why, you may be asking? Well, dear reader, because as any Master Gardener knows, poppy seeds can lay dormant for years, only to germinate when the soil they lay in gets turned up.
After particularly bloody battles, the war dead were left or buried under the battlefield. The battlefield turned graveyard, turned to soil and poppies grew.
In 1915, Canadian military medic John McCrae penned the poem, In Flander’s Field:
In Flander’s Fields
In Flanders Fields the poppies blow
Between the crosses, row on row
That mark our place; and in the sky
The larks, still bravely singing, fly
Scarce heard amid the guns below.
We are the Dead. Short days ago
We lived, felt dawn, saw sunset glow,
Loved and were loved, and now we lie,
In Flanders Fields.
Take up our quarrel with the foe:
To you from failing hands we throw
The torch; be yours to hold it high.
If ye break faith with us who die
We shall not sleep, though poppies grow
In Flanders Fields.
* * *
In 1918, an American woman, Moina Michael wrote:
We cherish too, the Poppy red
That grows on fields where valor led,
It seems to signal to the skies
That blood of heroes never dies . . .
She then adopted the custom of wearing a red poppy in memory of the sacrifices of war and also as a symbol of keeping the faith. After that, those darned French adopted the custom and took it one step further. So the story goes, Madam Guerin, after returning from the United States, made and sold red poppies to raise money to benefit orphaned children and destitute women in war torn France.
Folks in England, Australia, France, Canada and the good old US of A, still continue this tradition.
* * *
From Botanical.com: Red poppies are “Corn Poppies.” This plant does not contain opium.
Corn Poppies, Papaver rhoeas, however, does contain a mild sedative that has been used since the Romans were tops in the world.