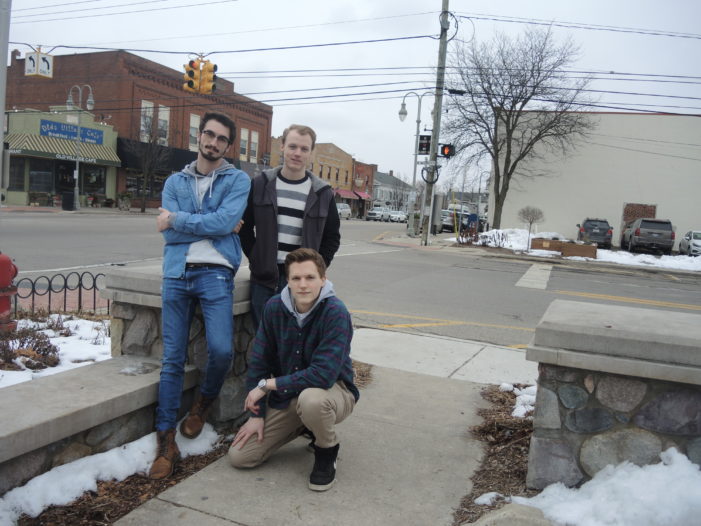 From left are Jake Fultz, PJ Twork, and Gabe Toth of Lochhaven. Photo by Phil Custodio

BY PHIL CUSTODIO
Clarkston News Editor
February might be too early to expect much change in the air, but not for the new alternative rock/pop band Lochaven.
The local trio was in town presenting their debut album “Change is Upon Us,” with the lead single “Now Or Never.”
The album dropped on Jan. 10, which happens to be the birthday of drummer P.J. Twork of Clarkston.
“That was a nice little coincidence,” said Twork, 23, who picked up the drums in the second grade.
“It was a toy, a First Act kit, something cool to do for the school talent show,” he said.
That set broke not long after the talent show, but in 2010 as a high schooler, he got another, this time a $100 garage sale drum kit.
“I’ve been playing the drums ever since then,” he said.
The trio, Twork, Gabe Toth of West Bloomfield, and Jake Fultz of White Lake, met through musical connections in high school.
“PJ and I played together in a band before, and we knew Jake through friend of ours in the band,” said Toth, 22, who joined that first band briefly before it dissipated. “Then we reconvened, like a phoenix that rose from the ashes.”
“I was playing the cello when I was younger, and got an ultimatum to play something else or suffer. So I got a guitar,” said lead guitar Fultz, 22, a student at Saginaw Valley State University studying theater who has been playing for eight years now.
“Guitar is the superior instrument,” agreed Twork.
Toth, a student at University of Michigan Ann Arbor studying industrial engineering, started singing along with the Beatles when he was about 10 years old.
“Classic rock, that sort of thing. I really liked it,” he said. “I worked to expand my vocal range, singing Journey songs. Steve Perry was a big influence. He still is. When puberty hit, I couldn’t hit the high notes anymore, but I still do in spirit.”
Toth has played the bass since he was about 16 and guitar from age 13.
“The bass comes naturally to me,” he said.
The name of the band comes from one of the streets Toth took to band practice, Lochaven Road.
“It seemed like a cool name, so I brought it up one day,” he said.
“It was the path that connected us,” Twork said.
“That’s the melodramatic answer,” Toth said. “I just thought it was a gnarly name.”
The band was years in the making, but achieved its current form in December 2017, Toth said.
“It’s not our final form,” Fultz said.
The new album tells the tale of a disenfranchised group of friends looking to right the world’s wrongs with catchy, hook-laden, and a very heart-on-sleeve brand of alternative rock.
They’re working to promote the album, write new music, and book and play shows all around metro Detroit, Saginaw, and the rest of the state.
They record, mix, and master at Rock Hill Sound in Rochester Hills.
“Matt Dalton did a really wonderful job,” Fultz said.
“He was so patient with us,” Twork said. “He really knows his stuff.”
“He’s got it all figured out,” Toth said.
They were getting ready to perform at Saginaw Valley on Feb. 12, as well as Chet’s Corner Bar in Bay City on April 4.
“We have a unique sound that’s also accessible and enjoyable,” Toth said. “We make good music, not run of the mill, something to enjoy in its own space. Listeners get more than they bargained for.”
“it reaches people on a higher level,” Fultz said.
“A carefree vibe, very thoughtful. People can connect with it, especially live,” Twork said.
In the short term, the band’s goal is to create more music.
“Our medium-term goals include going on tour. Long term, turn it into our job,” said Toth, who also hopes to perform slam poetry nights on Tuesdays and Thursdays at LA Cafe, according to the band’s “Now or Never” music video.
“For now, this is our unpaid internship,” Fultz said.
“It’s a reverse internship, we’re paying to get in there,” Toth said.
Their music is available on Spotify, Apple Music, iTunes, and Youtube, with hard copies available on their Facebook page.