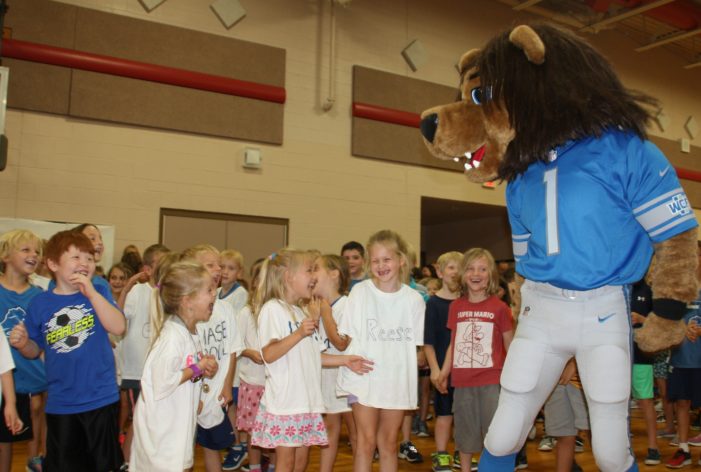 Springfield Plains Elementary (SPE) students learned about leadership and leading a healthy lifestyle during an assembly with the Detroit Lions Football Education Division last week.
“The Detroit Lions use their professional athletes as leaders and hope for our kids to model themselves after that leadership,” SPE Fifth Grade Teacher Alena Hall said.
Hall oversees the school’s student lighthouse team, which she described as being similar to a student council. Each year they try to give back to Springfield Plains with money raised through fundraisers.
“Selling candy-grams during Valentine’s Day, just doing little things around the school, like hosting a movie night, they collected money and they paid for an assembly where they’re ‘Lions for Leadership,’” Hall added.
The assembly discussed many topics Clarkston schools already focus on through initiatives such as Clarkston for Life. Students learned about living a healthy lifestyle by eating right and being active for 60 minutes every day. They were also taught the importance of education and how they can continue to learn new things throughout their entire lives. “Springfield Plains has been a Leader-in-Me school for the last two years,” Hall said. “The Detroit Lions… they’re kind of putting a spin-on-it, like leaders in the community reaching out to leaders in our school.”