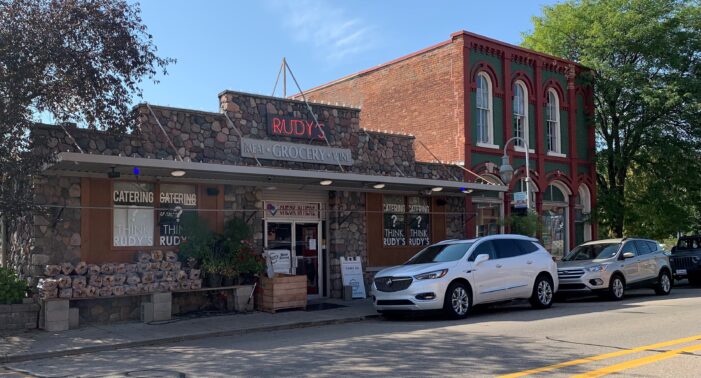 Back in the July 14, 1933 edition of The Clarkston News, an announcement on Page 1 detailed a new business in town.
“On Tuesday of this week, Hagele’s Market was purchased by Rudolf Schwarz, who will continue business in the present store at S. Washington and Main St. in Clarkston. Mr. Schwartz is from Pontiac. He has had experience in all the lines handled in the store,” read the announcement.
Now, more than 88 years later, Rudy’s Market and Catering is entering its last days as a grocery store before revamping its format to become a restaurant some 18-24 months from now.
The store will close this Saturday, September 4, and until then, all groceries are 50 percent off and wine and beer is 25 percent off at the store located at 9 South Main Street.
“We’re just trying to clean up the last of our inventory,” said Rudy’s co-owner Robert Esshaki. “Obviously, we were considering turning Rudy’s into a restaurant, and had gone to the city with some plans pre-COVID and then the opportunity to buy The Clarkston News building (at 5 South Main) and adjacent parking lot came up and we purchased those. We had wanted to buy those for 30 years, and we ended up buying them in 24 hours.
“Right now, we have a plan. Since we are such a big footprint – over 7,000 square feet plus 3,000 square feet upstairs – we do have room to include part of Rudy’s in there as well. Our plan is to do two restaurants as part of Rudy’s. We have a beautiful basement there we want to turn into a speakeasy if all our plans fall into place.”
Esshaki added he’s “really excited about the project.”
“I think that it is really going to change the makeup of downtown with having both buildings on the corner,” he said. “Obviously, we’re fully aware of the historical significance of both of those buildings. They were there long before us and they’ll be there long after us, so we’re fully aware of that responsibility and what limitations there are as well.”
That said. Esshaki noted how well restaurants have done in the downtown area over the years.
“Obviously, Curt (Catallo) and Union Joints and the Schneiders at The Fed have done an amazing job turning this into a restaurant destination,” said Esshaki. “We have seen a lot of demand for restaurants in downtown Clarkston. Based on a number of factors, in recent years, our business inside the store at Rudy’s has declined and our catering business has kind of exploded. That has allowed us to continue to do well there, but business has kind of changed into more of a food operation than a grocery store, moving along with the times.”
Esshaki admitted the transition will be challenging, but he is optimistic the plans will take shape at a gradual pace. He said several architects have been interviewed to work on the renovations and construction of the two buildings. Currently, the 5 South Main building is being leased to Chamberlain’s Auction Gallery until September 2022.
“We have to get all of our approvals and I know there are some challenges we’ll face, but we’ll discuss with the Historical District Commission what we’re allowed to do, and that will take some time,” Esshaki
said. “Then we have to get permits, order equipment, and a lot of that stuff is really delayed right now. That’s why the timeframe is so long, otherwise we could do it a lot sooner. The reality is that the supply chain is longer than it normally would be. Simple things, like getting equipment in 30 days or 60 days is now taking up to six months to get. Getting employees in the service industry these days is a challenge, but we feel time is on our side and we’ll be able to get employees once those challenges are pushed to the side.”
Perhaps the biggest question of all, though, is what type of restaurants can Clarkston expect in 2023?
“We’ve thought of a lot of different concepts,” Esshaki said. “Mediterranean is high on our list, and so is an Italian bistro. We also have some different American fare, and we are going to go to all the top restaurants, not just in Detroit, but in some other big cities so that we can do our homework.
“We don’t want to have a fad or something that’s hot right now. We want something that will be more of a staple-type thing. Both my partner Chris Thomas and I are foodies, so we’re really looking to do a spectacular project here and not your run-of-the-mill kind of restaurant project.”
After Saturday, the building will be closed and vacant until the grand re-opening, but that may change down the road, according to Esshaki.
“Honestly, we are entertaining some ideas like some sort of popups or maybe talking to the city to see if we could do something fun,” he said. “Maybe a SCAMP tour, potentially. We have not talked to (the city) yet, so let me make that clear. Maybe we get involved with the farmer’s market or something along those lines. We would like to keep the property somewhat active, if possible, throughout this whole process.”