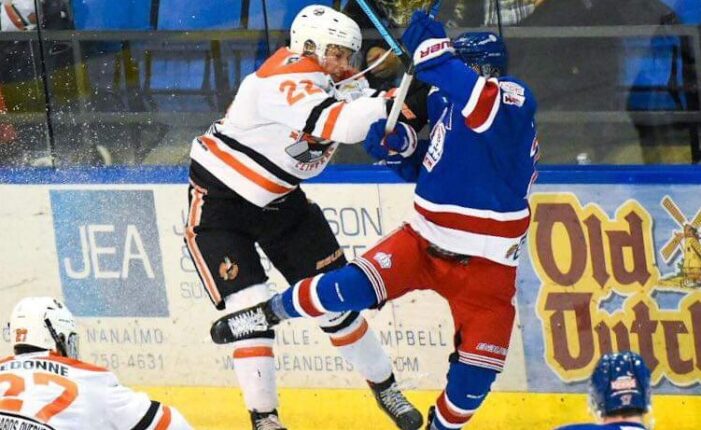 After Tim Washe graduated from Brother Rice High School in 2019, the Clarkston native found himself heading to Nanaimo, British Columbia, to play junior hockey for the Nanaimo Clippers.
He had played the previous five seasons for the Victory Honda AAA organization, even committing to NCAA Division I Western Michigan University along the way.
Needless to say, the kid has talent.
Washe is now gearing up to head back to Nanaimo and start his second season in the British Columbia Hockey League, which has been a thrilling experience, both on and off the ice in the Canadian province.
“Playing out in Nanaimo last year was an awesome experience,” said Washe, whose older brother, Paul, will be captain at Western Michigan this season as a senior. “It was really cool seeing a new area of the world. I loved seeing whales and seals on our ferry rides to and from the island. I love the outdoors and was able to go hiking and spend some time on the water.
“The people in Canada support the team and made me feel very welcome.”
During the 2019-20 season, Washe collected ten goals and 19 points with 95 penalty minutes in 55 games for the Clippers, a team that was set to start the second round of the league playoffs when COVID-19 struck.
“Once the season was canceled, I took a couple days to pack up and say my goodbyes and then started the drive home,” Washe said. “It took four days and I drove through two snowstorms in Montana and South Dakota.”
During the current offseason, Washe was drafted by the New Mexico Ice Wolves in the first round (31st overall) of the North American Hockey League’s Supplemental Draft. He was previously chosen by the Omaha Lancers, in 2017, and Fargo Force, in 2019, in past years’ United States Hockey League drafts.
“I feel really lucky to have such good options, but I’ll be back in Nanaimo for the 2020-21 season,” said Washe. “We will start training in September and games will start in December.”
As for the Western Michigan decision, Washe admitted having his brother’s input certainly played a role.
“There was a lot that went into the decision to play hockey at WMU,” said Washe. “I fell in love with the campus and arena on my visits. I also liked that it was pretty close to home (Kalamazoo is roughly 150 miles from Clarkston) and the atmosphere from the student section (the Lawson Lunatics) on game days is second to none.
“It is nice to have the inside scoop on the program and my brother influenced my decision in that I saw how happy he was.”
Growing up, Washe started skating at Lakeland Ice Arena playing Timbits before going over to Orchard Lake where he played for the Pirates. In addition to Victory Honda, Washe also played AAA hockey for Belle Tire and Compuware.
In Clarkston, Washe attended Springfield Plains Elementary, Sashabaw Middle School and one year at Clarkston Junior High for eighth grade before heading to Bloomfield Hills to attend Brother Rice.
“I really enjoyed my time at every Clarkston school, especially after-school lacrosse practice,” Washe said. “What I love most about Clarkston is the small-town feel. I love the restaurants, especially Union mac and cheese and Woodshop burnt ends.
“I remember the traditions of Concerts in the Park and hanging out at Depot Park.”
As he scans junior hockey and college hockey rosters, Washe realizes a ton of talent has come through Clarkston over the years.
“I think it’s awesome so many Clarkston hockey players are playing in junior leagues and college,” said Washe. “I’ve been playing with and against some of them for many years. I played with Zach Aughe my last two years at Victory Honda. It’s always great to reconnect when we’re both home.
“It’s fun because our families are also friends and keep in touch when we are gone.”
Aughe is set to be a freshman this coming season for the University of Maine, another NCAA Division I school, after playing last season for the NAHL’s Aberdeen Wings in Aberdeen, S.D.
With September now here, Washe said his plans before heading back out west include fishing and spending time with his two brothers, Paul and Luke, a junior at Brother Rice who also plays on the Warriors hockey team.
“I get out on the ice as much as I can and try to stay healthy,” said Washe.