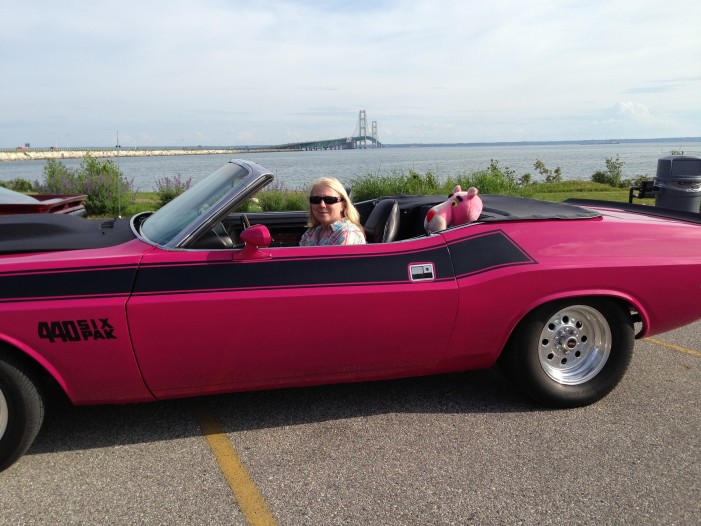 Denise Myers of Clarkston tools around Mackinac in her pink Dodge Challenger. This weekend, she’ll be at Autorama. Photo provided

BY PHIL CUSTODIO
Clarkston News Editor
The Pink Panther returns to Cobo Hall in Detroit for the Autorama this weekend.
Denise Myers of Clarkston will bring her hot pink 1971 Dodge Challenger convertible, named the Pink Panther, joining other members of her Michigan Mopar club.
“I thought it was just the coolest car,” Myers said. “Our daughter was around 7 when we got it. Since then, we’ve done parades with the girls in Pink Panther costumes, with the noses, tails, and ears. We’ve had a lot of fun with it.”
It was a customized race car when her husband, Warren Myers, found it. They mostly restored it to original specifications, but left on the racing wheels.
“It was a little over 12 second car, pretty fast for an old car back in its day,” Denise said.
They bought the car around the 40th anniversary of the Pink Panther movie, and would decorate the car with stuffed

Pink Panther dolls and play the cartoon character’s theme song in local parades.
“My daughter (Lindsay Myers) liked it, and asked what instrument it was,” Denise recalled. “We said it was a saxophone. So we brought home a brand new sax and she took lessons. She’s now 22 and a saxophone major at Grand Valley State University, all because she wanted to play the Pink Panther theme.”
Michigan Mopar club members get together many times during the year, at car shows, fall color tours, summer drives up north with stops along the way, Christmas dinners, annual meetings, and other activities.
“I’ve always liked things with wheels. My husband and I both have that love of cars,” Denise said.
They’ve also owned a 1989 Turbo Trans Am, 1986 Viper, 1978 Gold Bandit Trans Am Special Edition and 1998 Corvette Pace Car, and 1970 Dodge Charger, in addition to the pink Challenger.
The Myers usually go every year to Autorama at the Cobo Center in Detroit, this year from Friday-Sunday, Feb. 24-26.
“We make a long weekend out of it. It’s nice, a lot of fun,” Denise said.
The club has a ladies theme this year, with six vehicles sponsored and owned by women.
“We have some T-shirts matching the color of the car, like band T-shirts,” said Denise, one of the founding members of the club.
Autorama will feature more than 800 hot rods, customs, trucks and motorcycles from across the country and the world.
In honor of its 65th anniversary, they’ll also show off a collection of 20 of the most famous cars even made, including the Batmobile, Little Deuce Couple, and the Zingers. A live outdoor Hazzard County Stunt Show will feature a flying General Lee, Feb. 24, and Dukes of Hazzard stars Catherine Bach and Tom Wopat will appear for a meet-and-greet and autographs on Friday and Saturday, Feb. 24-25, from 1-5 p.m.
WWE Superstar AJ Styles will appear on Friday, Feb. 24, from 6-9 p.m. Danny “The Count” Koker from TV’s “Counting Cars” and his band, “Count’s 77″ performs on Feb. 25 at 5 p.m.
Also, Rick Harrison from History Channel’s “Pawn Stars,” and Skai Jackson from Disney’s “Bunk’d and Jessie” will appear on Feb. 26 from 1-5 p.m.
For more information, call 248-373-1700 or check www.autorama.com.