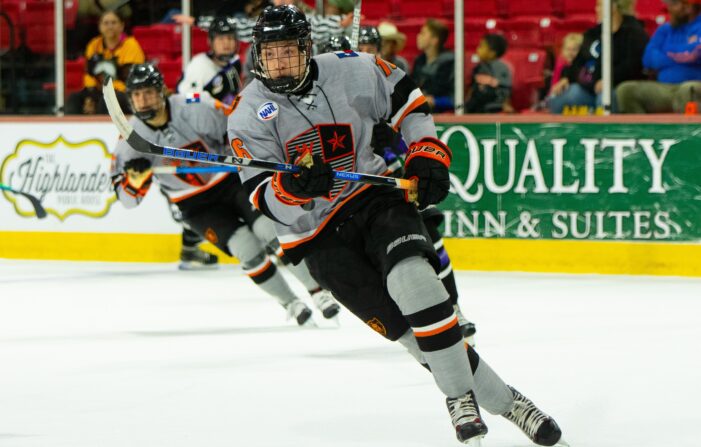 Owen Dyer grew up playing hockey in the Detroit area before heading off to junior hockey this season with the North American Hockey League’s Wichita Falls (Tex.) Warriors.
Just after the 2021-22 season started, the 17-year-old from Clarkston made another move for his future, committing to play NCAA Division I hockey down the road for Northern Michigan University.
Playing for the Warriors has given Dyer exposure to high-level competition to prepare him for college hockey.
“This season has gone really well,” said Dyer. “I’m definitely growing as a person and a player. The North American Hockey League is such good hockey. Playing with and against great competition has taken my game to a new level. On a team level, I couldn’t be in a better situation – great coaching and an amazing group of guys. I’ve never been part of a team that gets along this well and has a family-like feel. We are working hard every day to improve our on-ice chemistry and with the amount of talent we have, this team has the potential to turn this season into something special.”
Dyer played in the USA Hockey National Tournament last summer for the Honeybaked 16U AAA team and was noticed by Roth at the event. A few conversations later, and Dyer was sold on playing in Texas.
“With this being my first time away from home for an extended period, it has definitely been an adjustment, but one eased by the great people around me in Wichita Falls,” Dyer said. “The family that I am living with (McDonald’s) is amazing and have made things 100 times easier. They are always there to help in any way they can. Coach (Garrett) Roth has also done a lot to make sure the new situation is going well and like the McDonald’s, he is always there if I need anything. The transition back to online school for my senior year has been relatively easy.
“It’s definitely different than Michigan but still very fun. When you think of hockey, Texas probably isn’t at the top of your list for places to go, but the Warriors fans are definitely passionate and love to watch us play. It’s pretty cool being in a smaller town and people coming up to you and talking with you because they recognize you from the team, almost like a local celebrity.”
Dyer reached another milestone on New Year’s Day when he scored his first goal of the season in a 5-2 win over the Amarillo Wranglers.
“The puck got chipped to me in the neutral zone and I didn’t really have any options, so I dumped the puck down low behind the net to advance the puck up ice,” recalled Dyer. “My forwards did a great job forechecking and forced a turnover which led to a quick shot. I seemed to be in the right place at the right time as the rebound found its way out to me at the blue line and I fired a quick shot on net that ended up beating the goalie short-side high.
“It felt like a huge weight off my shoulders after scoring. I was relieved and really excited to get the first one out of the way and moving on.”
Back home, Dyer went to Davisburg Elementary School before going to Holly Middle School for sixth grade, Detroit Preparatory Sports Academy for seventh and eighth grades, and then Cranbrook through 11th grade.
“We moved here in 2007, and Clarkston’s great,” said Dyer. “It’s not too big, not too small. It’s easy to get around, big enough to have plenty to do and things to try, but not too big where it’s overwhelming.”
Dyer’s family includes his parents John and Meg, his younger brother Ian and dog Bella. He also has grandparents in Waterford.