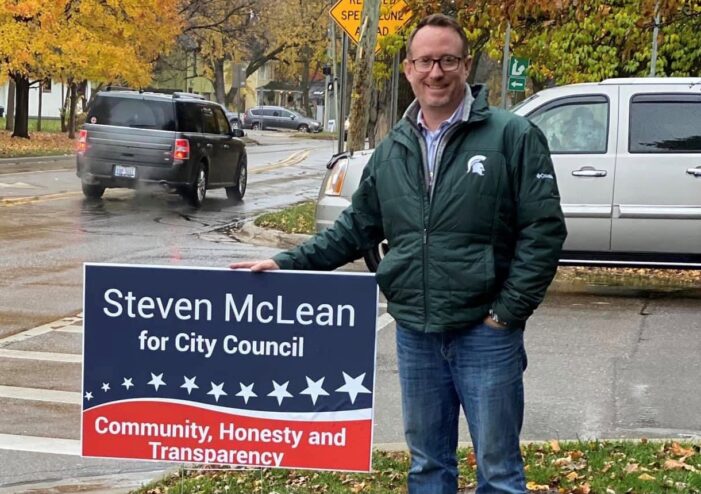 As a write-in candidate to be on the Clarkston City Council, Steven McLean feels he has a great shot to gain election.
As a 22-year resident of Clarkston, McLean said his bid to serve on the city council comes primarily from what he has seen the current council do and issues he has had with city government.
“Why did I decide to run? Well, I guess the best answer to that question is I am not happy with the current city council and a lot of the decisions they have made over the past several years,” said McLean. “Most importantly to me was the poor decision to fight the FOIA (Freedom of Information Act) request that has potentially cost the taxpayers of the city upwards of $400,000. I believe our government needs to be transparent and it is obvious to me that they currently are not.
“I also believe that I can’t sit here and complain about the current situation unless I am willing to put myself out there and do something about it. When I saw that Cory Johnston decided to run for mayor, it inspired me to run for city council. I believe the people deserve choices and they deserve better from our city council.”
Current city council members include Al Avery, Ed Bonser, Gary Casey, Jason Kneisc, Joe Luginski, and Sue Wylie. Bonser and Casey were appointed this past summer to fill unfinished terms of David Marsh and Scott Reynolds, who resigned in June. Before McLean started his bid, all council seats were going to be unopposed.
“I would like to see our government more transparent and provide better information to our citizens,” McLean said. “I would like for our city to be more welcoming to new people and to create a greater sense of community. Right now, I feel like there is an ‘us vs. them’ mentality instead of a ‘we’ mentality.”
And with no previous government experience notwithstanding, McLean says he is the right person to jump on city council.
“My wife, Leah, and I have lived in Clarkston for 22 years, and we raised our four children here,” said McLean.

“When our last child was getting ready to head off to college, we decided the time was right to try and move to Main Street. It was always a dream of mine growing up in Union Lake to live on Main Street, and Leah shared the same dream. We initially bought a vacant piece of property at 117 North Main Street and we planned to build our home there. We went through a very frustrating eight months of trying to get approval for our house plans from the Historic District Commission. Everything we proposed met all of the building requirements for the city but every month, the HDC would add another roadblock and deny our plans. Finally, our current home at 177 North Main Street became available and so we decided to purchase that and sell the lot.
“Although I do not have any significant experience in city government, I do have many other life experiences that I believe will lead to me being an outstanding city council member. I have experience with hospital governance (McLean is a physician at Ascension St. Mary’s in Saginaw and serves as the hospital’s Emergency Department medical director), and I have received multiple awards from them for my efforts.
“I have demonstrated, with my marathon and Ironman training, that when I set a goal, I achieve it. I have demonstrated, by achieving the highest patient satisfaction scores in the state, that I am a patient advocate and that we have created a culture of listening and caring. I believe in family and community. I believe that we should all be helping each other, not tearing each other down. When I win a seat on the city council, I will bring all of those attributes with me,”
If elected, McLean said he will get to work immediately.
“I believe I have a very good chance to win,” he said. “I realize that I was late to the game and as a write-in candidate, it is an uphill battle. However, I believe the citizens of Clarkston are tired of the current board and are ready for a change. I promise that if elected, I will be a good listener and I will be open and transparent. I will talk to and listen to my neighbors and solicit their opinions about all decisions that need to be made in the city.”
In Independence Township, all positions there are unopposed with Supervisor Patrick Kittle, Clerk Cari Neubeck, Treasurer Rachel Loughrin, and Trustees Jose Aliaga, Paul Brown, Theresa Nallamothu, and Ronald Ritchie.

In addition, Johnston and McLean released a joint statement regading next week’s election:
We have filed as write-in candidates for the Village of Clarkston city council because we believe the voters should have a choice and be better informed.
There are six open positions on the city council this year: Mayor, three two-year terms, and two one-year terms.
The six candidates currently on the ballot are all incumbents and running unopposed, until now.
The city council has seven members in total.
To the best of our knowledge, the present council members have made no public statements about why they are running and what they plan on doing other than Sue Wylie who is the only one that responded to the League of Women Voters questionnaire: my.lwv.org/michigan/oakland-area/voting/voter-guides
Given all the legal, financial, and development issues in the city and around us, we thought the voters should have a choice about who represents them along with better information on city matters.
We are both on Facebook and available to discuss city issues.
Cory Johnston – write-in candidate for mayor, CoryJohnstonforMayor@gmail.com
Steven McLean – write-in candidate for two-year city council member, steven.mclean@ascension.org