So many memories for such a small room 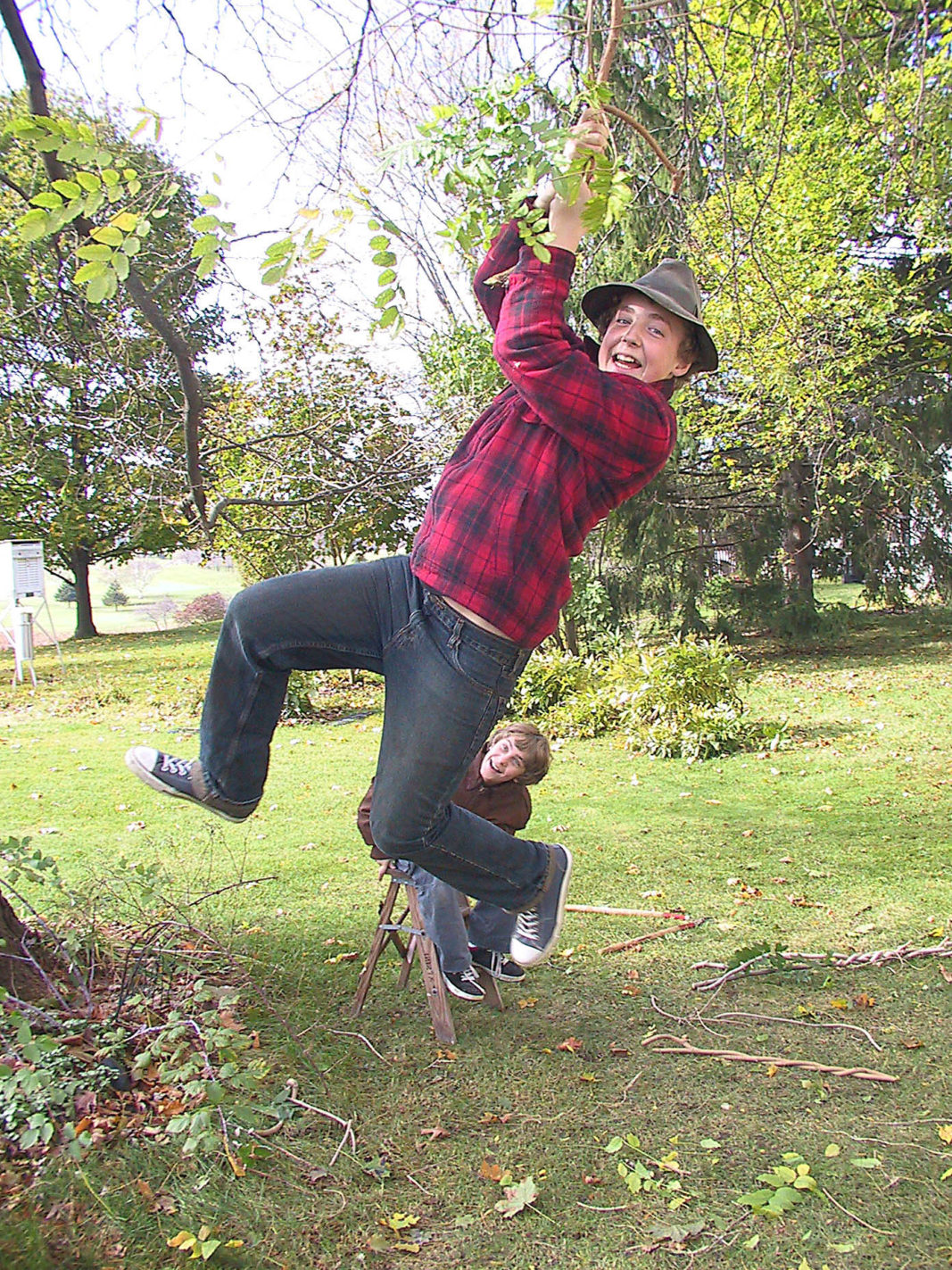 All those memories in the room and I can only find pictures outside the boy's bedroom. Shamus in action, Sean looking on.

Number One Son (Shamus, 20) has not laid his weary head on his pillow, in his bedroom at Casa D’Rush in over a year. And, for most of that time span the door to his room has stayed closed.
Yup. I just kept the door shut and let things stay as they were when he made up his mind that he was an adult, started working and living in the East Lansing area. If you’re blessed, they group up and move on to solve their own problems, live their own lives and have their own fun, all without your parental guidance or approval. Ah yes, the young man is as good as I was at his age in keeping in touch with his parents. I should have been better.
This past weekend Shamus’ younger brother and I, Sean (17.833 years old) made it our mission to tackle that bedroom — to make it Sean’s. It was not a quick project. We moved furniture, pitched bags and bags of “stuff”, mopped the floor, wiped down the cobwebs and moved furniture back in — it looks good. During the transformation time I had a lot of thoughts about that room. I reckon it’s called “reminiscing,” and it wasn’t at all a sad time. I smiled to myself many times.
I remembered before our new family moved in, tearing down and tossing out walls of plaster and lathe down to the 90-year-old, hard as rock pine studs. I remember having to order and put in 5/8ths inch thick drywall; mudding, sanding and painting. But, mostly I remember the times spent with Shamus, then Shamus and Sean and then Shamus again within those four walls.
When we moved in, young Master Shamus was just shy of two years old, brother Sean was still half a year from birth. The house, with its tall ceilings and old wood and masculine design (think Arts and Craft, but not quite) was built by Dr. Amos Wheelock about the same time he built Goodrich Hospital (1916). I am not saying the place was haunted when we moved in . . . but . . .
At bedtime, we left the old, heavy, solid door with the glass handle open to Shamus’ room. Morning after morning, we would wake to find that door closed. It literally happened all the time — even after the night when I went back into his room (before hitting the hay myself) and put a duffle-sized bag of Legos and building blocks in front of the door as to keep it open. The next morning that door was closed. The bag of blocks were moved out of the way.
The next Sunday at St. Mark’s Catholic Church, they faithful were handing out little viles of Holy Water to parishioners. I scammed two or three, and that day spent time telling any spooks in the house to vamoose while splashing the blessed H2O around all door frames. Surprisingly, the mysterious door closings stopped.
I remember laying next to Shamus and reading to him almost every night (and when Sean was old enough to move in with his brother to both). Sometimes I would fall asleep there next him, and his mom would have to wake me. I remember, he was a light sleeper, and to get off that bed I had to move at a cellular level, one cell at a time, until I slid off and moved out.

I remember one early morning, Mickey The Wonder-dog chasing a mouse around the house and right up onto Shamus’ bed, with the kid still under the covers, sleeping. (I think the boys mom was able to get said varmint off the bed, out of the room and house all without waking Shamus.)
I remember nighttime was storytime, for reading books like The Big Friendly Giant, James & the Giant Peach and making up stories — the kids’ favorite was one about a giant turtle emerging from a fissure in the back yard and inviting both boys on adventures — sometimes in tunnels beneath our town, sometimes on the Millpond but always in places Shamus and Sean could relate to.
When Shamus survived to reach teenagerdom, and that room was again just his, I remember the times sitting next to him, on his bed. Arm over his shoulder. Lectures, yup, I gave ‘em. But, also just being with him and letting him talk, giving what little comfort any “old man” could offer.
For some reason the different nicknames I called him popped in my head. Aside from Son, Shama-lama-ding-dong and Shaymoose were commonly uttered and heard in that room.
I wonder what I will think of when Sean finds his wings and flies off to make his own life. I can surmise it will be the same type of trip down memory lane. For now, I guess I miss Shamus. Miss talking to him daily. Miss seeing him more than a couple of times a year.
Yup, I miss him.

So many memories for such a small room added by Don Rush on January 17, 2018
View all posts by Don Rush →

4 Responses to "So many memories for such a small room"