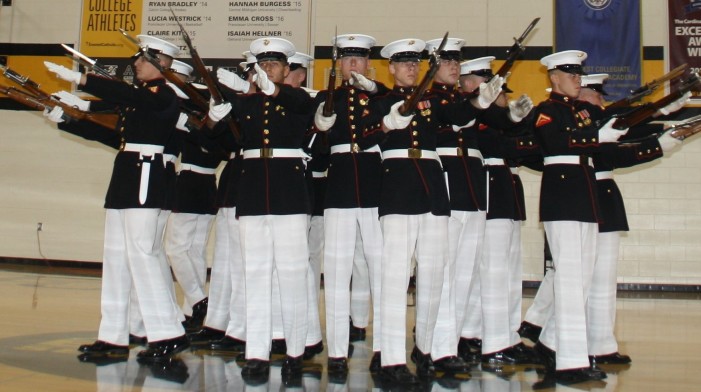 The United States Marine Corps visited Everest Collegiate High School and Academy last week for Detroit Marine Week.
“Once a year the Marine Corps holds a Marine Week, which is a week where we try to bridge the gap between our communities and the Corps,” said Major Alfred Jimenez. “That way our citizens, who we defend and serve, understand what we do as Marines on a daily basis and we are human just like they are.”
Everest high school students saw how technology and STEM (Science, Technology, Engineering and Math) disciplines play a role for the Marines on the battlefield.
“I’m into technology, I’m looking into computer science. It was really cool to see how it can be applied to the real world through the military,” said Everest senior George Reichert.
The students could interact with the different technology used by Marines, such as a bomb-disarming robot and a bio-metric capability system.
“I was fascinated by the robot they have that they send out to disarm bombs. All of the technology involved with it, it’s wonderful to be able to see that technology first hand, ask questions and learn more about the technology our military’s using to keep us safe,” Everest senior Caitlin Quinn said.
The National Museum of Marine Corps was also in attendance, teaching students about tools the corps used in the past for way-finding, weapons, cooking, and more.
Gwenn Adams, the museum’s public affairs director, said they display the progression of the corps and how technology has helped the Marines be safer and more efficient.
“My favorite part of the presentation was the museum because it was really cool to see like how the uniforms progressed and all the different techniques they used to stay safe throughout the years, from the Revolutionary War all the way through Vietnam until current day,” Reichert said.
Three Marines presented for the museum, one dressed in a World War II-era uniform, one from Vietnam, and one from the Desert Shield/Desert Storm era.
Major Jimenez said there’s going to be many events throughout the week, including static displays and exhibitions, music performances and presentations at other Oakland County schools.
After the presentation to Everest Collegiate High School, the rest of the academy joined the older students and watched a performance by the Marine Corps Silent Drill Platoon.
“That’s kind of like a culmination of who we are as Marines, our honor, our traditions, our dedication to service,” Major Jimenez added.