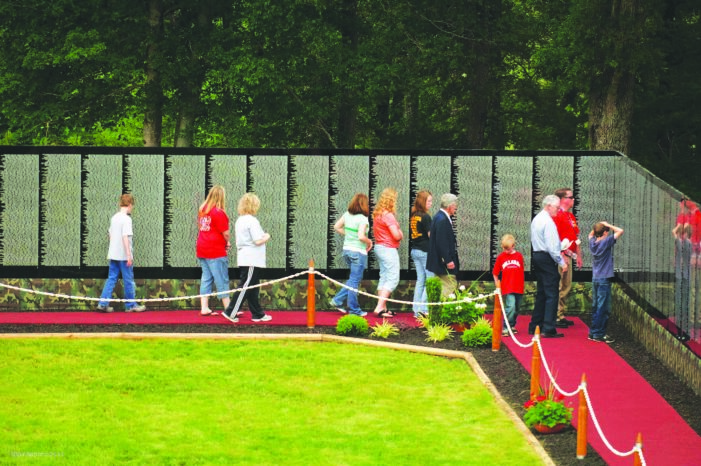 American Legion Holly Post 149 is bringing the Vietnam Veterans Memorial The Moving Wall to Holly for the first time.
The Moving Wall will be located at the Karl Richter Campus located at 300 East Street. The Wall will be open 24/7, open to the public, and free.
The theme for the Moving Wall in Holly is Reflections I. The committee is comprised of veterans, businesspeople, and citizens. The co-chairs are Vietnam veterans Joe Mishler and Rick Powers.
The Richter Campus is named after Air Force pilot Karl Richter, who was shot down on 198th mission over North Vietnam. He didn’t survive.
Included on the wall are the names of those who lost their lives in Vietnam from surrounding communities.
The Wall is sacred ground and people leave precious gifts at the Wall. Items left at the Wall in Holly will be collected and taken to the actual Wall in Washington, D.C. on Veterans Day this November.
The Vietnam Veterans Memorial has the names of 58,318 Americans who lost their lives during the Vietnam War. The Moving Wall is a half scale model of the actual Memorial in Washington, D.C. Vietnam Combat Veterans LTD has been traveling around the county with the Moving Wall.
The schedule for the event starts on August 4 at the Holiday Inn Express on North Holly Rd., off of exit 108 on I-75. The escort will begin at 9:30 a.m. and will be led by the Patriot Guard. Before the escort starts, the Patriot Guard will give a safety talk. The Wall should arrive at the Richter Campus around 10 a.m.
The opening ceremony is at 3 p.m.
On August 5, a POW/MIA service starts at 7 p.m. and on August 6; a veteran reunion will take place from 1 to 4 p.m. All veterans are welcome.
On August 6, at 7 p.m., a special performance will be presented by US Army veteran Joe Mishler and USMC veteran Nick Juno. Their performance is a combination of music and stories.
The closing ceremony is on August 7, at 3 p.m.
The Wall remain open until it is dismantled on Monday August 8.
For more information on The Moving Wall, visit themovingwall.org.