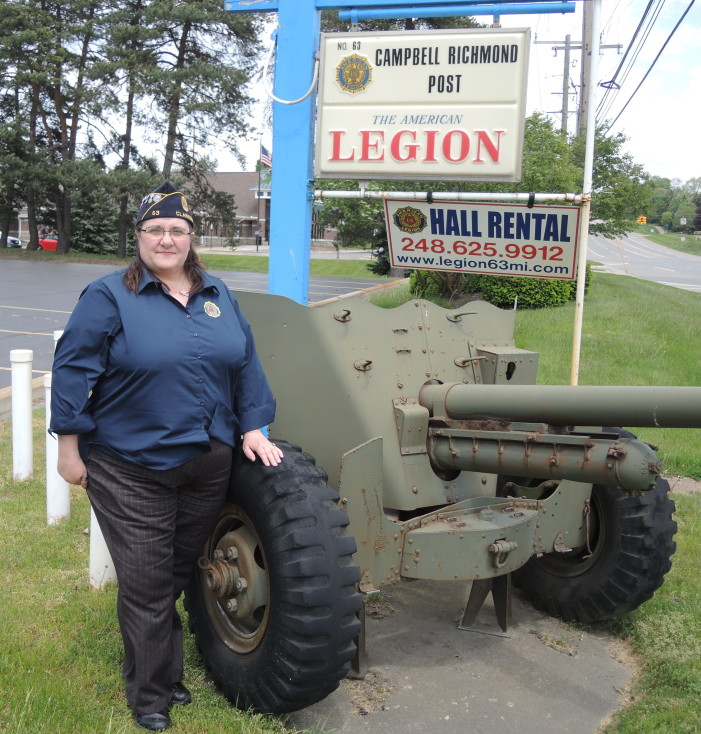 BY PHIL CUSTODIO
Clarkston News Editor
As the American Legion Post 63 prepares for Memorial Day remembrances on Monday, Kimberly Lambouris of Davisburg is preparing to assume her duties as leader of the post.
“I am very proud to be able to represent the Campbell-Richmond Post as their commander,” Lambouris said. “There’s a lot of work and a lot to learn, but there are a lot of guys helping me do this.”
She was also busy last weekend with fellow post members, collecting donations during their poppy drive with her grandson Doniven.
“He loves it, he has a good time,” she said. “One hundred percent goes to veterans.”
Lambouris served in the United States Air Force from 1988-1992 on weapons systems for B-52 bombers, including with the 63rd Munitions Maintenance Squadron. The work included development of bunker buster bombs now in use.
“It was interesting,” she said.
She didn’t join any veterans organizations after she completed her enlistment. As a single mother with two small children, she didn’t have time.
“It took a long time to get to the spot where I could help others,” she said. “But I’ve always wanted to help veterans.”
Lambouris was helping out at the local Veterans Administration hospital about four years ago when she read an article about the American Legion helping vets. With wartime service status for Desert Storm and Desert Shield, she was eligible to join.
She had some trepidations, though.
“A lot of times, females are dismissed, like at car clubs or car shows,” she said. “Guys talk down to you. I didn’t want to be a part of an organization that would do that.”
She emailed the post and met with post members including Keith Marbutt and Don Davis.
“Commander Don Davis took me under his wing,” Lambouris said. “Familiarity is one thing I missed – we all share common experiences. It’s nice to have it back.”
So far, she served as second vice commander as well as service officer.
“It’s one of my favorite jobs,” she said. “It’s devoted to helping veterans.”
She works with the VA, Oakland County Veterans Court, Habitat Clarkston, and local homeless shelters to help vets with paperwork, rides to doctors’ offices and jobs, pay bills, and other services, all funded by the annual poppy sale.
Working with the veterans court, they call around to see who needs community-service help.
“They have a really good success rate, which I love,” Lambouris said. “They usually stay out of trouble. It’s a great program to be connected with.”
When she thought about being commander of the post, she had to consider the amount of time it would take.
“My husband (Dean, a retired Oakland County Sheriff’s deputy) likes my time,” she said. “I would love to have his support, but I’m kind of the person who dives in and figures it out later.”
They talked and worked it out.
“We decided he would support me, so I put my hat in the ring,” she said.
She was selected to be the first female commander of the American Legion Post, located on M-15 just north of I-75 in Independence Township, serving a one-year term starting in June.
“It’s not like a CEO. You don’t get a vote. The membership has the ultimate power,” she said. “But I would like to see a little more family orientated activities, to get younger vets involved in things they can take their kids to.”
Family activities so far include sponsoring a youth baseball team with Independence Township parks and recreation, providing the honor guard at opening day, and marching in local parades.
“The bottom line is the veterans and what we can do to help each other,” she said. “Veterans won’t necessarily come to us. We go to them. The biggest thing is getting the word out. I didn’t know about the American Legion and what they do to help veterans. We’re here, this is what we do.”