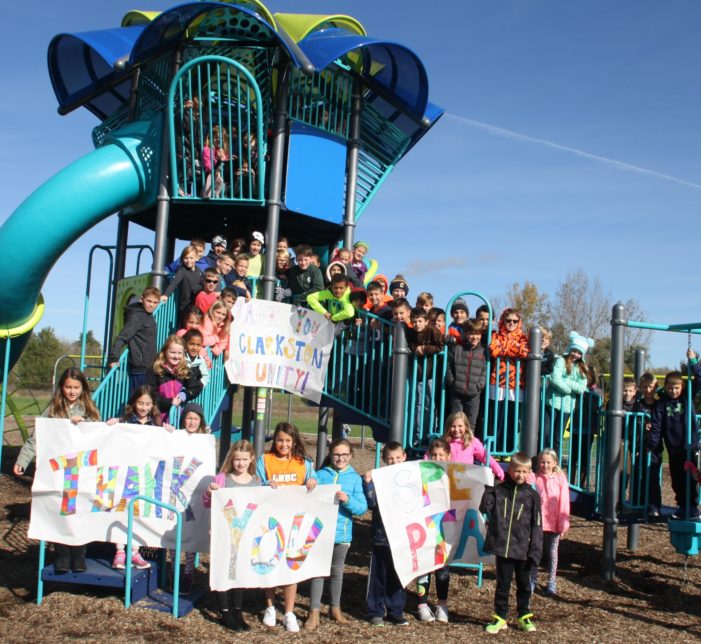 A popular feature at Springfield Plains Elementary’s new playground, over five years in the making, is the large twin slides on top of the two-story play structure.
“My favorite thing to play on is probably the big slides because they’re really steep and fun,” said fifth grader Lydia Adams. “You can try two different slides and there’s not a lot of people waiting on it.”
“It’s awesome, it’s bigger and better,” fifth grader Eli Kern agreed. “Like the bigger slides, last year the slides were really small.”
Other new features of the playground include saucer swings, carousels and DNA monkey bars.
“You can climb upside down and that’s really fun. They didn’t have it last year,” said fifth grader Jackson Craglow. “Like monkey bars that twist around you.”
Craglow added the playground is much bigger this year. The old playground was small and overcrowded.
“Everyone has a chance to do what they want to do, because last year it was very small,” fourth grader Brooks Warner agreed.
SPE Principal Matthew Gifford said there’s a notable difference in student’s behavior from last year.  They’re now more engaged and energetic during recess.
“The playground’s awesome, it’s amazing, the colors depict the kids’ vibrant personalities, their passions, and their energy for running around out here,” Gifford said. “I’m very grateful for the Clarkston community in support of the recent bond, and also a big thank you to the PTA for their involvement.”
The new bright blue and green playground is split into two parts, a lower and upper playground. Gifford explained the Young Five’s and Kindergartners play on the lower due to height, and grades first through fifth can use both.
Gifford estimated the PTA’s donation produced 50 percent of the new playground equipment.
“The PTA began fundraising for this I want to say like six, seven years ago. They started brainstorming ideas on it and finally with the help of our community and through the PTA’s leadership and support we were able to put it together,” he said.
All the students were grateful to the PTA and the community for raising the money as well.
“It’s awesome how everybody pitched in and helped with our new playground so we could all be part of this new experience,” Adams said.
“I’m really happy and I bet everyone else is too because they did it,” Warner agreed. “Everyone else has a chance to run around and just have fun and just climb rock climbing walls, go down slides, climb ladders. It’s a very big opportunity I really like.”
Principal Gifford added, “Thank you so much to the PTA and the community. We’re extremely grateful.”