No gym? No problem for Clarkston resident 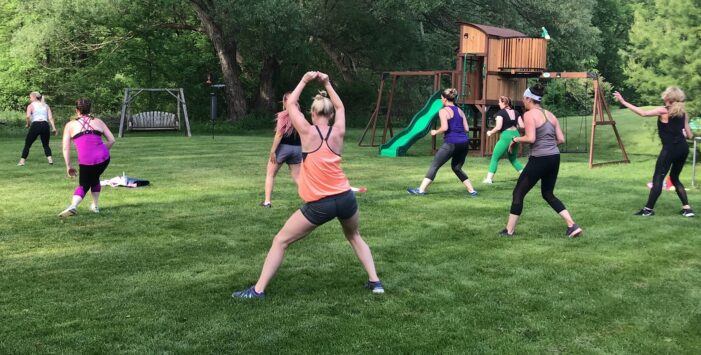 Due to the COVID-19 pandemic, most gyms still have their doors closed in the state of Michigan.
While some have moved to virtual classes for their members, others have remained patiently waiting for the ‘OK’ by Governor Gretchen Whitmer to reopen.
Nicki Warner, a Clarkston resident and an instructor at Mueva Fitness, has found a way to introduce a new fitness class to locals that is fun, in-person, and still socially distanced.
“The class I teach is called 305 Fitness, which is based out of New York,” Warner said of the 45-minute class which is a mixture of 1980s aerobics and dancing at the club.
Last year, studios in New York City started offering certification course for instructors outside of the city.
“In New York, there are like six standalone studios with about 100 classes a week, and all of the classes are waitlisted,” said Warner. “It’s huge in the city.”
Warner is one of three certified instructors in the state of Michigan for 305 Fitness. The other two are located in Detroit and Ann Arbor.
Each month, out-of-state instructors are sent a mixtape created by the DJs in the studios to use during their classes.
Warner has been hosting these classes in the backyard of her home for the last couple of weeks.
“The yard is pretty big and totally flat,” said Warner. “I have a speaker system and wireless mic so it’s like if you’re in a studio.”

On average, Warner has had about 20 participants come to the 305 Fitness class. Due to the size of her backyard and still following social distancing guidelines, she believes she can fit about 30 participants per class. Each class is $10 per participant. They are usually held twice a week after 6 p.m.
Warner added the idea behind 305 Fitness is about feeling good in your skin and not feeling like you have to fit into this fitness mold.
“I want people to work out because they enjoy it, not because they’re trying to burn the calories,” she said.
That’s why all moves done in this 305 Fitness class are easily modifiable so everyone can participate and enjoy themselves, she added.
In keeping with the idea of feeling good mentally, Warner has created a class of 305 Fitness for preteens ages 8-13 with modified moves and modified music.
Her goal is to teach the younger generation fitness can be fun and doesn’t have to be done in the normal fashion of running on a treadmill.
On top of her 305 Fitness class in her backyard, Warner also teaches Pilates and toning classes at her home and a Pilates and Barre class virtually for Mueva Fitness on Thursday mornings.
For more information about the classes Warner offers, contact her on Instagram @NickiWardo or through email at Nicki@getlitfitness.com.