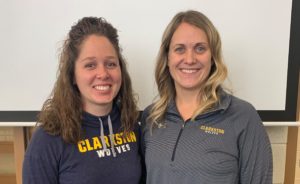 Back in 2015, an outdoor learning space for the younger students in Clarkston Community Schools went from a vision to reality at Renaissance High School.
A Young 5’s teacher, Katie Woodworth, wanted to create the space for her students and after one thing led to another, Renaissance teachers Suzie Miller and Megan Cook jumped on board.
“After that, we just kind of took that vision from her and we ran with it,” said Miller, who teaches science at RHS. “We took some students out there and looked at the spaces to see what kinds of things we could do. Stage 1 was clean up and we cleaned up over 4,000 pounds of debris, including yard waste and garbage that people had just been throwing back in these areas.
“We cleaned up all the trails, widened them, and then found this area with this enormous oak tree. We thought this was the perfect spot for a learning space with picnic tables for the kids. It’s right next to the pond, so it’s right in the middle of everything. We’re just trying to create these natural spaces that have been destroyed through various reasons.”
Fast forward to 2019, and the space now includes a music area, an impending kitchen area and storybook trail, birdhouses and nesting houses. The trail and kitchen should be completed by the end of the school year.
“And now, we have birds living in the birdhouses,” noted Cook. “You can lift the one end and look inside and see the nests. We’ve had to troubleshoot some of the music area as some of these things have rusted or kids climb on these and don’t think about it. There’s different things we’ve had to troubleshoot that we just didn’t think about beforehand because the big kids didn’t climb or anything like that at the start.”
Last year, Miller worked closely with Jenny McClorey, a teacher at the Early Childhood Center on improving the outdoor learning center.
The vast majority of the program has been funded by grants and community donations.
Currently, the two new projects include the storybook trail and outdoor kitchen. Two sinks have already been donated by the community.
For the storybook trail, which is in partnership with the Clarkston library, between the Early Childhood Center and the library, 20 plaques will be installed that will each have one page of a children’s story and interactive activities. As the children walk through, they’ll follow the story all while interacting with nature. The stories will change based on the monthly library theme.
The outdoor kitchen idea came from a need at the Early Childhood Center.
“They wanted some kind of outdoor exploration kitchen that can go on their playground,” Miller said. “All the teachers from the Early Childhood Center got together and requested we put it inside their playground.”
“There will be removable parts and buckets they can bring out,” added Cook. “We also asked the community to give us some utensils and pots and pans that can be kid-friendly that they can pretend to use. We’ll have kitchen sinks, but the faucets will not work or have running water, obviously. They’ll just be there for the looks of it.”
The priority is to finish the storybook trail by June 7, while the kitchen will be built and not installed until the fall.
“It will all depend on timing and the kind of weather we get,” said Miller.
At the end of the school year, during the “skinny semester,” Miller and Cook will be outside working with student volunteers working on the storybook trail and kitchen “drilling holes and building things,” said Cook.
“Depending on the project, we work with a variety of teachers at the Early Childhood Center,” Miller said. “We’ll also get involved with the IT people, probably not until next year, but we want to incorporate some sort of technology into our storybook trail as well.”
Miller said she has seen the benefits to the outdoor space as it relates to students’ development.
“We still have kids that have worked on this project, outside of school, on their own time, go and clean up and monitor things,” she said. “They send us emails and say what is going on and what has happened. It’s really cool to see high school kids that oftentimes maybe don’t have faith in themselves, work with the little kids. We just stand back and watch them, and they just do their thing.
“They are amazing and it’s exciting to see how excited the little kids are, too.”