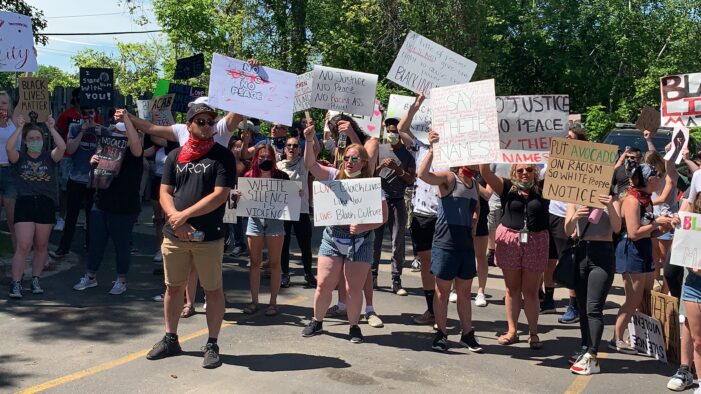 Protesters chant their messages regarding racial equality in front of the Independence Township police substation, June 7. Photos by Matt Mackinder

Alex Martinez moved away from Clarkston when he was 10 years old, and left town with sour feelings.
He came back in what some see as an impactful way this past Sunday afternoon, organizing a protest in town against racism that saw several hundred people – mostly young individuals who looked to be recent high school graduates – march peacefully from Depot Park to the Independence Township police substation and back to the park.
Protests and rallies such as this one have become commonplace in communities across the country in light of the recent deaths of George Floyd, Breonna Taylor, and Ahmaud Arbery due to alleged police brutality.
“I thought the protest went great,” said the 20-year-old Martinez. “A lot of the community really showed up today, people of all ages and colors. It was as peaceful as it could have been. We didn’t antagonize anybody, nor we were bothered by anybody, other than a few middle fingers from cars passing by.
“And I think it was for the better. The town’s old-fashioned views have to change, and they must get used to things like these.”
When news spread of the protest last Friday, social media was on fire. Some people voiced their displeasure with the protest and the #DefundPolice hashtag, while others had positive feedback on The Clarkston News’ Facebook page. As of Sunday evening, the post simply announcing the event had 200 comments and 21 shares.

“I’m all for peaceful protest in honor of George Floyd, but why would you support a protest/rally that wants to defund the police?” asked Lisa Gilchrist. “Not all police are bad, just like not all people are bad; most are good. Can you imagine the chaos and destruction if police were defunded?”
“People have a right to peaceful protest – you can’t stop them,” added Trish Mastick Mairet. “Of course, an all-white sheltered town full of white privilege like Clarkston wouldn’t want it. Where’s your midwestern backbone and passion to show your support for justice? Otherwise, you are just a midwestern milquetoast materialistic community.
“Where’s your sense of humanity?”
A police presence was not needed Sunday, and while some questioned the gathering violating Governor Gretchen Whitmer’s order of more than 100 people together outside, Independence Township Substation Commander Lt. Todd Hill had an explanation.
“The First Amendment of the U.S. Constitution protects the freedom of the right of the people to peaceably assemble, and the Oakland County Sheriff’s Office holds one’s constitutional rights in the highest regard while respecting citizen’s rights to peacefully rally without police intervention,” Hill said.
Martinez explained that the #DefundPolice notation doesn’t mean to take away all funding from law enforcement.
“Defunding of police comes from many ideas,” said Martinez. “Using that money to put into social programs, in areas of crime, and mental health. In no way am I implying a 100 percent defunding of police. They are a necessity and a few bad apples don’t spoil the bunch.”
Seeing the turnout for the protest Sunday, which was one of several during the weekend in Clarkston, made Martinez feel he accomplished what he set out to do.
“I think everybody helped me reach that goal and even surpass it,” said Martinez. “They couldn’t have have been more civil, and for an hour and a half, the town had its eyes on us and what we believe in. We marched to the police station and expressed our views outside peacefully. And once again, the crowd couldn’t have been better.”
Coming back to Clarkston to protest wasn’t in Martinez’s initial plans, however.
“I originally intended on attending Birmingham’s protest (Sunday),” Martinez said. “But I thought bringing a protest to somewhere I myself have felt discriminated against and my friends of color while I attended school there I thought was just as important as having a protest in a big city like Detroit or Lansing, especially in a very closed-minded, white-dominant town.”