Putting his stamp on ITFD 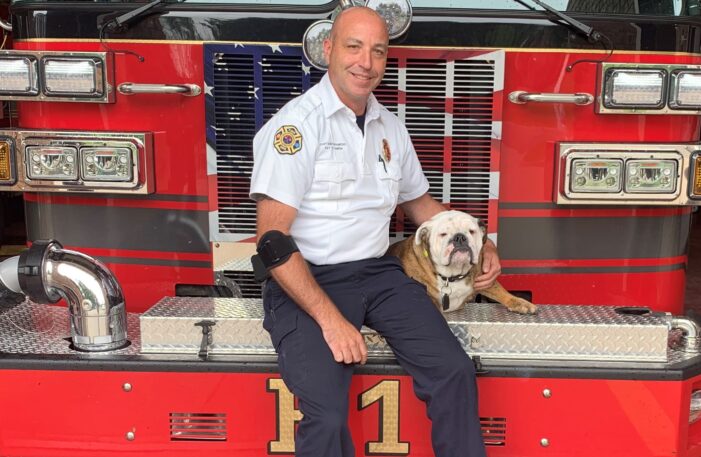 Pat Stamper has been with the Independence Township Fire Department since 2005, most recently serving as operations captain.
Last month, when Mitch Petterson stepped down as fire chief to accept a job with General Motors, Stamper was appointed interim chief. He’ll serve in the interim role until September 8, when a new fire chief will be named by the Independence Township Board of Trustees. Stamper is among the candidates to take over and have his interim tag removed.
“I was approached and asked to step in as the interim chief while they go through all the testing and choose someone for the permanent role in September,” Stamper said. “The transition? The transition has been interesting. I went from almost 30 years working 24-hour shifts and now I am home every night. Working with Renée Herbert (department’s business manager), she’s a rock star and has really made the transition for me quite easier.
“We have a lot of stuff on the plate. We’re not waiting until September. We’re marching forward with lots and lots of projects right now. We’ll see what happens in September.”
Taking over for Petterson, someone Stamper calls a great colleague and a great friend, has been another adjustment as Stamper said there are “big shoes to fill.”
“It’s been different because we both have different management styles,” said Stamper. “We both have the same long-term goals, but we have a different way of doing things. It’s been interesting, and I’m still in contact with Mitch, and he gives me some pointers when I ask, but like I said, I came from working 24-hour shifts and now, I’m in a whole different aspect of the business. I came over here, and I was paid for 30 years to fix things immediately, and now it’s a process. I want to fix things immediately, but it doesn’t work like that over here (as fire chief). There are quotes and there are budgets, things like that. I’m learning some of this is ‘hurry up and wait’ until you can do it properly.
“This is a very different role.”
Stepping into more of an administrative setting has made Stamper recognize some of the challenges Petterson faced when he was fire chief.
“I didn’t realize when you are on that side of the building, you want things now,” Stamper said. “We don’t have time to figure things out long-term. People are always calling us to fix things immediately. Some of that frustration in the past would bleed over to go between Mitch and I and we would say, ‘What are we waiting on?’ Now, I get it. I’ve got my eyes open there and this is a learning process, a different process.

“After 28 years, it’s hard to make that switch overnight.”
Some of Stamper’s new duties include speaking to the Independence Township Board of Trustees at the biweekly meetings on department matters.
“I’m getting used to that,” said Stamper. “It’s a new aspect speaking at the podium coming from watching other people there and you know what? It’s a little harder than it looks to get all your ducks in a row and make sure you have all the information available.
“The biggest change in duties is being responsible with taxpayer money and to make sure you are doing things in the most efficient manner and still get the job done. I’m a taxpayer, too. It’s really easy to spend money, but it’s hard to do it efficiently and in a smart way.”
Stamper noted he is all-in on the possibility of being tabbed the new fire chief in less than two months.
“At this point, absolutely, I’m going through the process,” Stamper said. “I wouldn’t be doing all the testing if I didn’t think I could do it, but I am also preparing for the possibility that it is someone else who gets the role. Our plans aren’t stopping in September. We’re going long-term. If it’s not me, I’ll try to leave this office in the best shape I can for the next person that comes in and help them in any way I can with the transition.”
Should Stamper not get the permanent job, he would simply revert back to his operations captain duties.
“I know that job a whole lot better than this one, but like I said, we’ll see what happens in September,” Stamper said.
On a personal level, Stamper is invested in the local community. Born and raised in Clarkston, he graduated from Clarkston High School in 1991. His family includes his wife Kimmie and their blended family of children that is comprised of his children Gage and Gavin and her children Gauge and Tyler.
Perhaps the most well-known family member is the family dog Josie, a four-year-old bulldog often seen at the fire station and has been known to go on calls with firefighters and make appearances at community events.
“After I graduated, I moved away for a while, but I moved back so my kids could grow up here and play sports here and be involved in the schools,” said Stamper. “My wife has been very supportive of me and to be honest, you have to be in this business. To understand that I may be gone for 24 hours like before to now, where I have the weight of the world on my shoulders as we go through this transition, she’s been great. We love this community and to me, being here is more than just a job. Everything we do in this office also affects my family personally, so what better inspiration and motivation for me than to do the best job I can every day.”
Stamper also said that while there is imminent change, “the fire department marches on” and will continue to be a viable component of the community.
“We don’t close,” said Stamper. “We don’t do business hours. We don’t get to shut down because things are changing. We’re going to change with those changes. People can be confident that this department is going to move forward no matter what. We have a long-term goal here, and that is to provide the best customer service as possible to our community, today and forever.”