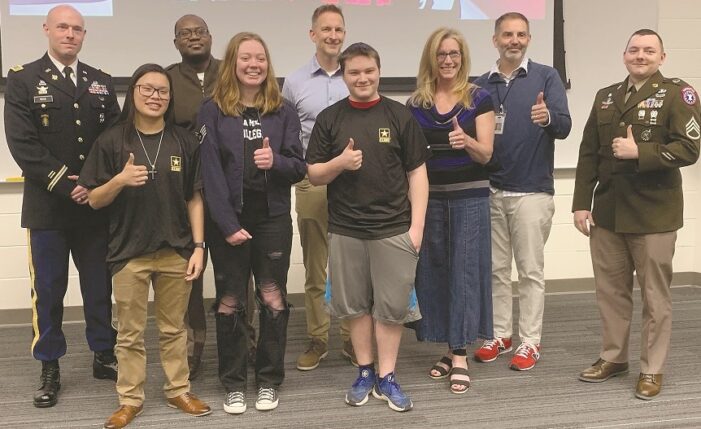 As the end of the 2021-22 school year approaches, many Clarkston students are making plans for their future.
While the most common choice is to go to college, five Wolves’ seniors will be joining the United States Armed Forces as Ayesha Cox, Candice McAvoy, and Cameron Spangler are planning to enlist in the Army, while Mackenzie Ayriss has chosen the Air Force. Another senior, Jacob McMahon, graduated early and is already serving in the Marines.
Ayriss, McAvoy, and Spangler were recognized last Tuesday in a ceremony at Clarkston High School. Cox was unable to attend due to sickness.
All three spoke at the event and mentioned why they chose the military route after their high school years are completed.
Ayriss is starting out at Georgia Military College, a preparatory school for the U.S. Air Force Academy, with a Falcon Foundation scholarship through the U.S. Air Force Academy alumni.
“From there, I hope to go through the academy and get a degree, potentially in Arabic, and from there, be an intelligence officer in the Air Force,” said Ayriss.
At the ceremony, McAvoy was presented a check for $102,128 through the Army College Fund and Montgomery GI Bill by SSG Kyle Vallade. She will be joining the Army Infantry and Airborne units.
“This is a little bit of a milestone for me because she is the first senior from this school I’ve been able to put in the Army since I started recruiting,” Vallade said. “It’s an even bigger milestone for her because she gets to serve her country, and she picked a very fantastic MOS (military occupational specialty). She’s getting paid a $20,000 bonus to jump out of airplanes. A lot of people would kill for this position.”
“I’ve been working with SSG Vallade the past couple months to figure out what it is I want to do and find a better way to learn about life,” McAvoy said.
For Spangler, he is heading to the Army to become a wheeled vehicle mechanic.
“My plan is to stay in there for 20 years, get my pension, and do as many jobs as I possibly can, which includes combat medic, MP (military police), and another one that I haven’t decided yet,” said Spangler.
Along with families of the three students, who also took part in a swearing-in ceremony with Major Brian Wice, Clarkston Community Schools Superintendent Dr. Shawn Ryan, Clarkston High School Principal Gary Kaul, CCS Board President Kelli Horst, and SFC Michael Clay also attended the event.