BY PHIL CUSTODIO
Clarkston News Editor
The morning of his 20th birthday, Nov. 4, 1967, Ken Simmons was in his bunk aboard the USS Navarro in the South China Sea when he woke up to an angry ocean.
“We were rocking big time down below,” said Simmons, Independence Township resident for the past 40 years. “Everyone wanted to know what was going on. It was all word of mouth, no cell phones. A messenger came down and said we’re in a typhoon, and there’s a ship hung up on the reefs off the coast of Vietnam. We were the closet ship available, so we were going in to rescue them.”
The 455-foot-long Navarro could only get within two miles of the stricken British merchant ship Habib Marikar, so the sailors launched two landing craft, a dangerous operation in a storm generating 25-30 foot waves.
“We had a big crane to pick up the LCM (Landing Craft Mechanized) to launch it, guys on all four corners. Almost all of us were just young kids. We listened to the officer and he’d tell you what to do,” he said.
Simmons grew up in Muskegon and volunteered for the Naval Reserves in 1965 while he was still in high school. He was assigned to the Navarro, a World-War II troop transport, as a deck hand in his first and only cruise.
“I thought it was the lesser of two evils, instead of getting drafted into the Army,” he said.
After about four weeks of processing and training at Naval Station Treasure Island in California, he flew to Hawaii where he joined the Navarro in April, 1967.
“The ship was dockside, and they were loading these pallets filled with paint. I thought, oh my goodness, that looks like a lot of paint,” he said. “We painted that ship nine times. Every day we would paint it, then we chipped it, then repainted it. It was to keep us busy.”
He was assigned to the ship’s First Division as a deck hand, working with a group of about 20 men on a spot of the ship about 100-by-100-feet in area.
“We kept it clean and painted it, mopped the floors, did whatever they wanted us to do,” he said. 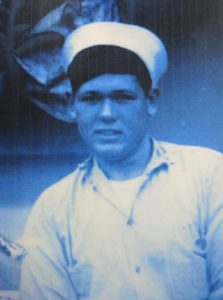 Things were busier during the rescue on Nov. 4, 1967, in the middle of Typhoon Emma. The waves made launching their LCM difficult.
“The first time we did it, we picked it up and it was swinging to other side of the ship,” he said. “Somehow we got it back where it was originally at. The officers came up with an idea to lift it back up, and when the wave hitting the ship was at its highest, drop it in the water.”
That’s what they did, and the smaller boat dropped just four or five feet because the waves were so high. Then it swung back and knocked a big hole in the side of the ship, above the water line.
“Over the PA system they called for damage control. Maybe 15 guys, all experienced in welding and repair, they came running. They spot welded a piece of metal over the hole,” he said.
The LCMs’ approach to the stricken freighter took about five hours, “forward three waves, back one wave,” Simmons said.
They rescued 38 survivors, with the Habib Marikar suffered a single fatality. They took them to Cam Ranh Bay, South Vietnam.
“There were a lot of injuries,” Simmons said.
“There was at least two feet of water in the LCMs,” he said. “Talking to them later, they said if the pump had failed, they would have been in trouble.”
After that, they spent four months in dry dock for repairs in Japan.
“We had some good times in Japan,” he said.
During the nine month cruise, the Navarro also took part in salvage operations of the Clarke County, which was caught up on a reef while under fire by the North Vietnamese.
“We sent damage control people over, made repairs, and helped pull them off the reef,” Simmons said.
They made stops in South Korea, Hong Kong, and the Philippines. Assignments included transporting 1,200 Thai troops for service in Vietnam.
“We took them back to Saigon, sailed up the river in that big ship to drop the troops off,” Simmons said. “Waiting up on the dock was Gen. Westmoreland (commander of U.S. forces in Vietnam from 1964 to 1968). He came aboard and gave a big speech. It made the national news, the first Thai troops to enter the war.”
As the cruise came to an end, Simmons accepted an offer to take early leave and came home. He received his honorably discharge and moved to Oxford, Mich., where he had relatives.
He met his wife, Karen, at a Fourth of July party, and moved to her hometown of Clarkston. He and Karen, a 1966 graduate of Clarkston High School, were married for 43 years, with three children and four grandchildren. Karen (Johnson) was a teacher at Bailey Lake Elementary. She passed away in 2013.
Simmons worked at GB Dupont, a fastener company for the auto industry, retiring after 20 years.
Simmons was diagnosed in 2015 with ailments related to his service and exposure to Agent Orange, including heart problems, neuropathy in feet and legs, borderline kidney disease, and hearing loss, and receives a 100 percent disability pension from the Navy.
“I grew up a lot, from an 18 year old kid right out of high school, to a few weeks later being under fire,” Simmons said. “There were a lot of fun times, but when reflecting on it, there were some rough times there, too.”