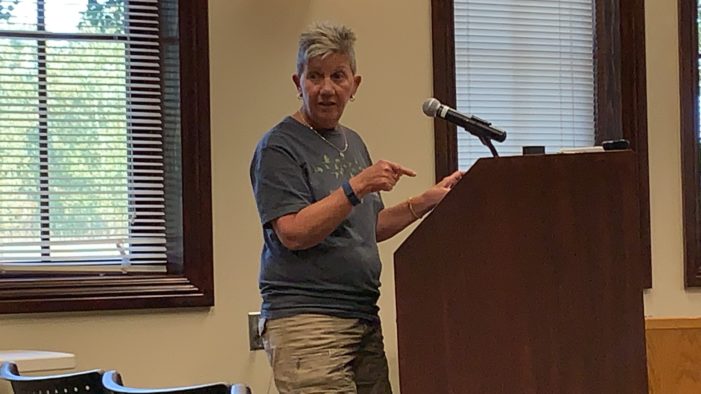 Several township residents voiced their opinions against a proposed LED sign at the new Alex’s Market and Grill, or anywhere else in the township.
No resident who spoke at the Sept. 24 Board of Trustees was in favor of the LED sign at Alex’s Market, located at Andersonville and White Lake roads.
“It seems to be an interpretation problem,” said Sam Moraco, also a member of the Planning Commission. “I worked on the master plan for 17 years and worked on de-emphasizing commercial, lowering aerial signs, trying to keep Independence Township a bedroom community. Lots of people are moving here from surrounding towns, and I think there is a reason for that. That’s my biggest reason against (the LED signs). It goes against everything I’ve worked for.”
Curt Carson added that he’s also concerned with the sign situation.
“Every person that I’ve talked to in the community when bringing up LED lights, the first thing they talk about is distraction,” Carson said. “We’ve got a planning commission and this whole issue came up in front of the planning commission, and they really took the prudent route here. They decided to send it back to the township planner and have the planner come back to them, as opposed to just jumping out and putting something out there like a lot of other communities have done. They let the cat out of the bag and found out that there’s all kinds of issues with these signs.”
“I moved to this area because of the environment,” said Robert White. “And environmental contamination can take a lot of different views. Lighting is one of them.”
Another resident of the township, Rae Luallen, said she has nothing against Alex’s Market, but has other issues.
“To me, if you’re going to have a rule or a regulation or an ordinance, it should be the same for everybody,” Luallen said. “If you go down Clarkston Road, at the Board of Education building, they have an LED sign with text on it. How did they get it?”
Schools operate outside of the township ordinances, according to township officials.
The Planning Commission recommended denial, with conditions, on Aug. 8. The first reading of the proposed sign conditions for the market was unanimously approved by the Township Board, Sept. 10.
After approving first reading, the Township Board proposed a six-month moratorium on new LED sign requests, to provide the Planning Commission time to create LED sign standards and incorporate them into township ordinances. The moratorium is to take effect after second reading (Oct. 8), public comment, and approval. Second reading will be after all legal documentation for this Planned Unit Development amendment is complete and agreed to by the developer, Steve Nannoshi.