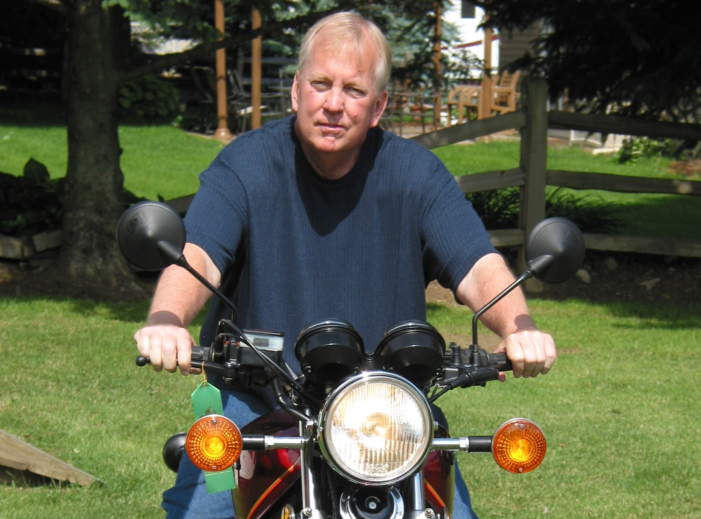 Everybody has their own niches and interests, something they use to cope with life and the punches it throws their way.
Clarkston resident and retired Pontiac police detective Roger Smith uses motorcycles and motorcycle restoration as his escape from reality.
“I got my first motorcycle is 1956, and I’ve been involved with motorcycles ever since,” said Smith. “With my police history being intense and working with victims of child molestation for 14 years, motorcycle restoration and riding was a good release for me.”
Smith has restored 25 vintage motorcycles with a long list of ownership history as well. He works a lot with vintage Japanese bikes, similar to the ones he owned as a kid.
“Having lots of motorcycles, I would work on them and race them, like drag racing and enduro (woods) racing,” Smith said.
On top of restoring and racing motorcycles, Smith has a pretty thick history with competing and showing off the motorcycles and has won many awards for his restorations. Some of these awards landing his bikes on the front cover of antique motorcycle magazines and the Cycle World Magazine Restoration of the Year award.
Smith also has a background in journalism, where wrote articles and reviews for motorcycle magazines. He even has his own motorcycle magazine he works on and publishes from home.
During his days of competing, he got his start with the Antique Motorcycle Club of America (AMCA). This club is a very successful non-profit group that has been around for nearly 60 years.
In 2007, the Antique Motorcycle Foundation (AMF) broke off into its own non-profit organization. Smith began his work with the AMF as its secretary, and two years later was asked to be the vice president, a position for he has now held for nine years. The AMF is not a direct part of the AMCA, but they work closely together. The main goal of the foundation is to share the heritage of motorcycles with the public and educate people about motorcycling, the evolution of motorcycling and the technology, culture and industry included with motorcycling. Smith shared that not only do the AMCA and AMF hold competitions, but they also have clubs all over the world. Michigan alone has four active chapters through the AMCA, one of which is located in Southeast Michigan.
“The Metro Detroit chapter has meetings out here in the Clarkston area,” Smith noted.
For those who are interested in joining, you can contact the chapter president, Ryan Curtis, at 248-842-6799. Being a member of the club gives participants access to a monthly magazine and events all over the country.
The foundation has a strong leadership forum where leaders of the motorcycle industry come and sit down to talk about the past and future of motorcycles and what the foundation can do to help support that future. With an intense focus on historic motorcycles, the AMF has showcases with the Motorcyclopedia Museum, located in New York, and the National Motorcycle Museum, located in Iowa. There is also a large interest in the future of the motorcycle community that the AMF supports.
“We give grants to students who want to learn about motorcycle restoration” Smith said.
These grants go toward classes including painting, motorcycle history, and typically anything within the motorcycle industry. Something unique to the foundation is the virtual library members were able to absorb from the AMCA that now includes literature and instruction manuals for motorcycles dating back into 1910.
This virtual library is open to the public at www.amf.foundation.
Smith was also an instructor for three years in Michigan where he taught off-road vehicle class courses. These classes were made for people who enjoyed recreational dirt biking and trained them how to properly and safely operate these vehicles. After taking the class and passing, students were given a sticker they placed on their dirt bikes showing their completion of the class.
More recently, Smith has seven restored bikes in his possession, one of which is a 1980 Honda CBX 6-cylinder motorcycle that has been on the cover of two motorcycle magazines. He also has two bikes that were chosen to be featured in a 2020-21 motorcycle calendar published by Paul Oxman and photographed by Doug Mitchel.
“Doug knew of my restorations and judged some of my other bikes about 10 years ago” Smith said.
One of the bikes being featured is a 1962 Honda CL 250, one of the first and most rare scrambler bikes. The other is a 1965 Sears Allstate 175 that was originally built in Austria.
Smith can be reached at rsmith@amf.foundation.