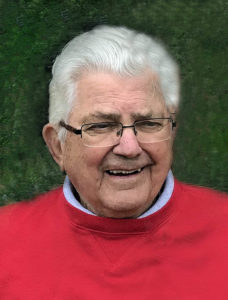 passed away March 14, 2020 at the age 91.  Preceded in death by his wife Sharmon Marie of 67 years; loving father of Shawn (Randy) Armstrong and Kim (David) Allan; proud grandfather of Stephen (Colleen) Armstrong, Megan (Todd) Hall, Mandi (Dan) Brown, Daniel Armstrong, Matthew Allan and Katie (Gary) Sparks; cherished great grandfather of Logan, Alyssa, Jacob, Reagan, Olivia, Anna, Nicholas, Bowen, Hayden, Lila, Andrea, Halle and Abigail; brother of Barbara (the late Ron) Musgrave; survived by his loving nieces Leslie (Dennis), Jill (Greg) and Missy. Dick served proudly in the U.S. Army where he was assigned to the Military Intelligence Division and stationed at the Pentagon Building for future training. He then served at the U.S. Embassy in Moscow, Russia. He traveled extensively throughout Europe, Italy, France, England, Czechoslovakia, Austria, Germany, Poland and Russia. He was an avid golfer, Chicago Cubs fan and spent most of his life on Grand Traverse Bay. He will be greatly missed by the kind staff of Royal Diner where Dick spent the last couple of years having his morning breakfast. Above all, he loved and cherished his family. A Memorial Service in honor of Richard and Sharmon Blasey will be held in the near future. Service details will be updated on Richard’s online guestbook at www.wintfuneralhome.com.