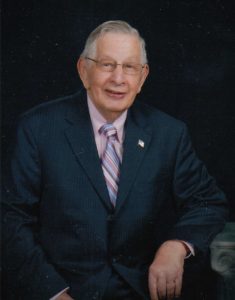 Robert Francis Tresedder, age 93 of Grand Blanc, passed away on Wednesday, February 19, 2020. He was born in Negaunee, Michigan to parents William and Margaret (Michelli) Tresedder. Bob enlisted in the United States Army Air Force on January 13, 1944 at the age of 17. He was a WWII Veteran who served in several states, France, and Germany and flew on the B-17 Bombers as the “eyes” in the glass turret to determine friend or foe of oncoming planes. He worked for Metropolitan Life Insurance Company for most of his career. Bob enjoyed bowling, dogs, and even had his own pet sitting service. He was always interested in new cars and was a fan of Cadillacs. He was well known around town for his red and white Cadillac. He was very active with the Grand Blanc Senior Citizens Center and more recently, activities at American House. He enjoyed many Saturday mornings at Big Boy. Bob loved life and got up every morning and decided today would be a good day. Bob was a Gift of Life donor and is survived by daughters: Joy (Dennis) Kozlowski and Harriet (Max) Clark; grandchildren: Jenny (Wallace) Lewis, Mark (Laura) Kozlowski, Julie (Justin) Thompson, Robert (Christina) Clark, Meredith (Sean) Scarlett, and Jordan Clark; great grandchildren: Logan, Aubrey, Kendall, Tyler, Luke, Claire, Grant, Annabelle, and one due in July; sister-in-law, Mary Johns; many nieces, nephews, and friends he made throughout the years. He was preceded in death by both parents; wife of 58 years, Janet Tresedder in 2006; siblings: Donald Tresedder and Carole Nelson. A funeral service will be held at 11am on Wednesday, March 4, 2020 at First Congregational United Church of Christ, 6494 S. Belsay Rd., Grand Blanc. Rev. Gary Bagley and Dr. Max Hayden officiating. Visitation will take place on Tuesday, March 3, 2020 from 3-8pm at Hill Funeral Home, 11723 S. Saginaw St., Grand Blanc, and once again on Wednesday, one hour prior to the service at church, beginning at 10am. Interment at Great Lakes National Cemetery. In lieu of flowers, those desiring may make a memorial contribution to First Congregational United Church of Christ of Grand Blanc or the Michigan Humane Society.