Robotics champions of the world 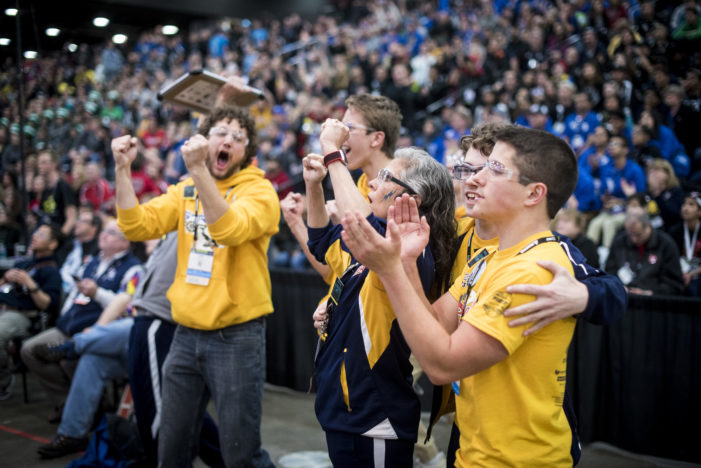 BY WENDI REARDON PRICE
Clarkston News Staff Writer
Hugs and high-fives started a few seconds before the countdown reached zero, making it official – Team RUSH 27 is the 2018 World Champion.
“The team was excited beyond belief,” said Clarkston High School senior Jason Richards about Team RUSH 27’s victory at the FIRST Robotics World Championships at Ford Field in Detroit, Saturday. “Everyone has been working so hard this year on the team and it was great to see all of our hard work pay off. This was my last tournament as a student member of Team RUSH, and I couldn’t think of a better way to end this four-year journey than with winning a World Championship.”

Team RUSH took the championship with their alliance partners Team 2767, Stryke Force from Kalamazoo; Team 2708, Lake Effect Robotics from Kingston, Ontario, Canada; and Team 4027, Centre County 4-H Robotics from State College, Penn.
“I feel like a rock star,” said coach and teacher Kyle Hughes, adding it was also overwhelming, incredible, and amazing to celebrate with a home crowd in Detroit. “Seeing as it was the first time to hold the World Championships at Ford Field, it was extremely special to the team to be the first team to win there. It was even more special to my family. My son, Cody, our lead driver and drive captain, won the Division 1 Football State Championship last November on Ford Field, and now is the World Champion for robotics. It is pretty amazing and incredible to be the champions twice.”
Richards added the atmosphere at the world championship was awesome.
“The team felt very prepared so there was time to look around, meet new teams and have some fun, too,” he said. “Thursday night, instead of going to the team party at Ford Field, we met two other teams 3620, The Average Joes from St. Joseph, and 2767, Stryke Force from Kalamazoo at Hart Plaza, and ran around outside having fun on our own. It was great to see the three teams playing games and just relaxing together. The competition atmosphere was great – one filled with anticipation, excitement, disappointments and further accomplishments.”
Team RUSH 27 won the Daly Division going 12-5 after competing in qualifier matches, winning both their matches in quarterfinals and semifinals, and winning all three matches in the finals.
The win moved them on to the Einstein Round Robin.
“If you are one of the top alliances from the round robin you move on to Ford Ford,” Richards explained. “The biggest challenges from this tournament were the length of the tournament and the new venue. The world championship has three days of competition compared to just the normal two. We were so happy to see the World Championship competition moved to Detroit, but we didn’t know what to expect. Going into a competition with that scary unknown factor was a big challenge we faced.”
Team RUSH 27 finished the season going 61-26, winning the FIM District Livonia meet. During the state championship they went 14-3 before finishing in the semifinals. They won the Gracious Professionalism Award, Innovation in Control Award, and two Industrial Design Awards.
Hughes added through the season the robot went through a lot of alterations after each tournament which included trying new forks for their lift earlier in the tournament.
“We found we needed more cross support,” she said. “We put on the old ones and we were hanging again. Continuous improvement, but overall the robot was awesome.”
She added the team was also awesome.

“Every year, we say our team that year was the best group of students ever. This year, there is something different about them,” Hughes said. “They are very special and selfless. They are willing to do what is needed for the team. I remember Kurt Richardson talking about his football players like this after they won the state title in football – about how good the kids were, and how they would sacrifice for the good of the team. The robotics team has been the same way. They sit in the stands all weekend just to get data on other teams. Our scouting was spot-on and these kids deserve a ton of credit. Our pit crew worked diligently to get the robot performing to it’s best. Our drivers, Cody Hughes and Kyle Brooks, this set of drivers is the best. I can say now, best in the world. They have been driving together for two years. They complement each other. Our judges knocked it out of the park. We have great kids – they are kind to each other and kind to others. They understand the level of excellence and expectation from Team RUSH, and they strive for quality. I couldn’t be more lucky.”
Richards added what also helped the team’s success was a space Clarkston Community Schools provided the team at the high school. The space was enough to build a full-sized competition field.
“This gave our drivers more opportunity to practice in a more real playing scenario and the programming team had extra time to work on autonomous mode,” he said. “We also invited teams from around the state with a team coming all the way from Temperance to practice with us. I think this practice field gave us a huge advantage in driving the robot and helped us towards our goal of  winning the World Championship.”
More than 15,000 students from around the world traveled to Detroit for the world championship which was held at Cobo Center and Ford Field. There were 700 robotics teams from 37 countries across the four FIRST programs participated.