The saga continues: Deplorables talk back! 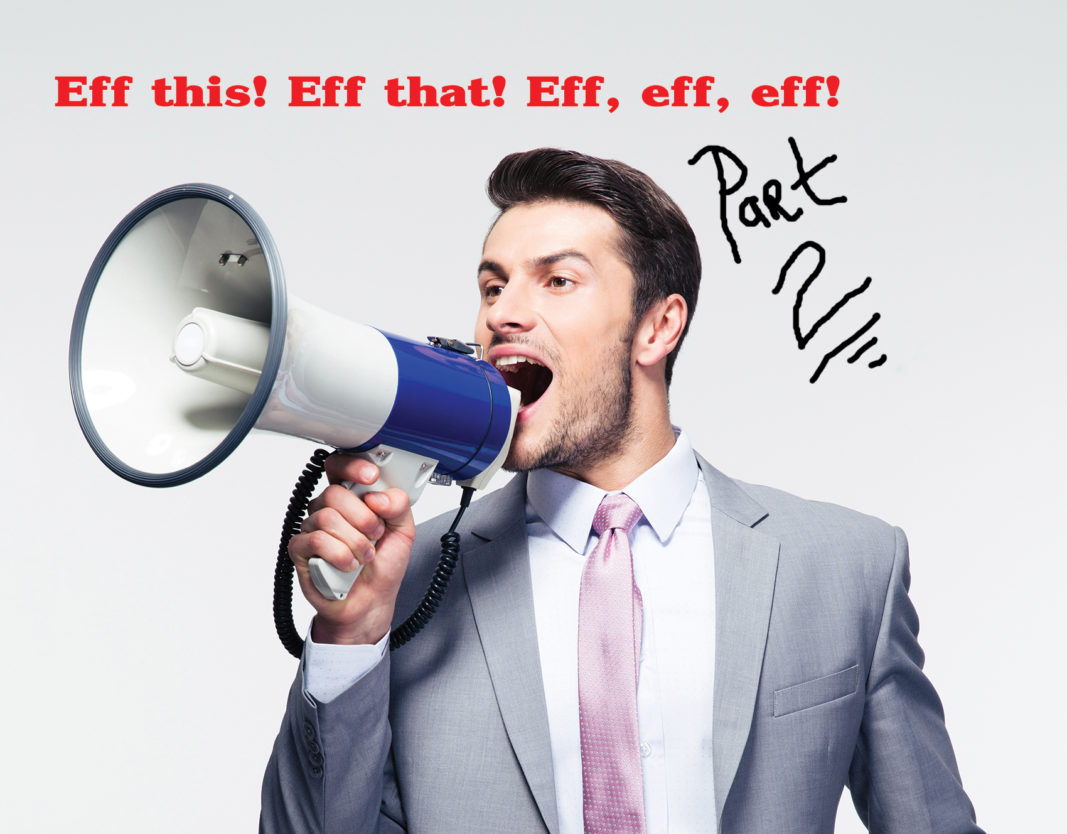 It’s interesting, I think, that in a world where no one has any time for fun, some actually read the words I throw together Monday morning. And, I am grateful. It means I am not wasting time, and therefore also not wasting the boss’ money.
Last week I waxed poetically about the “eff-dash- dash-dash” word and its all to often usage, in some inappropriate times and places. Really didn’t think I would get responses to my namby pamby, self-righteous rant. As always life proves I am wrong quite often. Readers called me, emailed me, texted, responded on social media and talked to me on the streets.
Who woulda’ thunk it?
* * *
Hi Don, Gotta’ say, I enjoy your column, and it’s not often I respond, but I do enjoy reading your stories and the way you express yourself. This last column on deplorable behavior hit a nerve with me. You ask, “How did we become such a self-absorbed, disrespectful people?” Well, I think it goes back to what you eluded to about your childhood. I don’t think many of these folks had much discipline in their upbringing. They were allowed to express themselves any way they pleased, all in the context of self-expression and to “respect their feelings” and “their right to express themselves.” Who are we to take that away from them – huh? How dare you try to discipline a child to express themselves – inappropriate or not? So, guess what, the end product are two guys sitting next to you in the restaurant doing just that. Go figure. Bob C., Clarkston
* * *
Dear Dinosaur Don, Great column. Sorry, you had to give up on your breakfast. Next time call me, I’ll “rush” to assist you. Gotch your back, Gerry S.
* * *
I feel you are identifying the loss of polite society and the fabric of respect that used to hold us together. As the Chinese say, “A fish rots from the head down.” From refusing to say “Happy Holidays” out of respect for the religious plurality to disrespecting freedom of speech when someone takes a knee to the rejection of political correctness (polite society), America has shifted to a rude and crude society. John. S.
* * *
This is a “bugbear ” of mine, too. Personally I believe these words are acceptable from time to time for emphasis. Frequency diminishes their power. Otherwise there are a multitude of alternatives. Sadly many people are either lazy linguistically or do not have the vocabulary to express themselves. This is not an excuse, merely an unfortunate fact. Excellent column. Thank you. Alys S., London, England.
* * *
Good column. As I am very guilty of using foul language, I am trying to clean it up now that we have grandchildren. Your point is well taken. Peg.
* * *
And, this from anonymous . . .
Swearing was considered bad because it was vulgar. Vulgar means “of, relating to, or constituting the ordinary people in a society; spoken by, or being in the language spoken by, the people generally; vernacular; characterized by ignorance of or lack of good breeding or taste…”
Who defines good breeding and taste? Usually the rich/elite, who often deem common folks as inferior, vulgar, not worthy of respect (even if they’re good folks.)
It’s tied to a type of conservative structure that places elite men at the top of their constructed social structure. If you want to be (or pretend to be) a part of the higher-ups, put the vulgar down (and help the elite keep them there.)
Why not swear in front of women or children? As a man that would make you a vulgar, lower than them, not worthy of respect kind of dude. Can’t have that, can you? That’s what you were taught to believe, even if it’s not really true. Keep that belief in place with a load of guilt and shame, or “tradition” that was also constructed by the elite.
President Trump wanted (needed) votes of common (aka vulgar) folks. He said loved these uneducated, common folks, and gained their trust by openly talking their talk (common/vulgar talk), while pegging Hillary as the rich/elite that’s historically put common/vulgar folks down. And, he went to town when she called his faithful followers deplorables. Those common folks bought into it, swore their loyalty to him and have let him use them ever since. See how that works?
Is it a “simple” case of leaders being disrespectful to one another? Give me a break. It’s a major power struggle between the conservative/traditional/rich/predominately white males and their faithful followers who feel entitled to remain at the top of that constructed social structure (see above) versus the “Others” (aka non-white, non-christian, not heterosexual male, etc.) who never really believed or accepted that social structure and are openly challenging it, unafraid to the so-called wrath of god that an increasing number of people don’t believe in, either.
* * *
There you have it, some good food for thought. Thank you one and all for reading and caring enough to write! Dialogue is a good thing!
Comments for the prudish Don Rush? Send ‘em to DontRushDon@gmail.com

The saga continues: Deplorables talk back! added by Don Rush on January 16, 2019
View all posts by Don Rush →