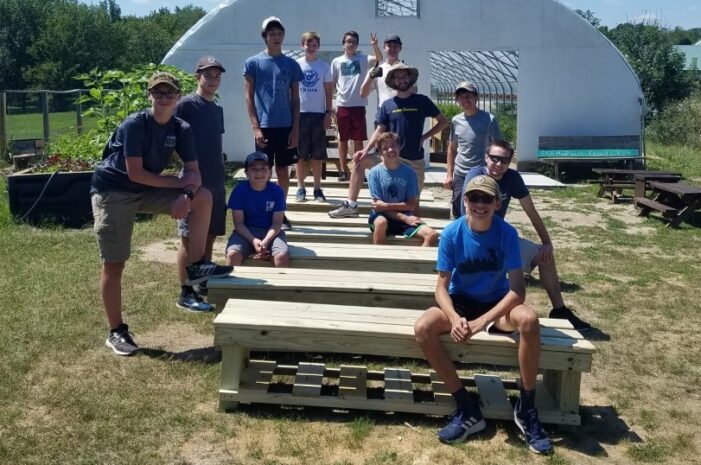 BY BRANDON KATHMAN
Special to the Clarkston News

A partnership between the Clarkston Family Farm, an educational nonprofit, and local scouting has resulted in 10 separate Eagle projects at the farm.
Director Chelsea O’Brien founded the farm in collaboration with other educators, naturalists and businesspeople in January 2017. They established the nonprofit as a functioning farm where young people can learn about nature, sustainability, and healthy eating. In addition to a number of gardens, the property is home to chickens, pigs and rabbits. In describing the scouts’ relationship with her nonprofit, O’Brien said they were “with me when we started.”
“We do a lot of large-scale free programming for our community; that’s where the scouts have been especially integral,” O’Brien said. “Scouts from Webelos all the way up to Eagles started engaging because we needed help running our programs.”
O’Brien said the scouts, especially those from local Troop 199, initially helped with “family fun days” and skill-building workshops. She explained that the scouts were especially predisposed to help with nature-based activities. A deeper relationship developed through those initial good turns. The scouts of Troop 199 formed a connection with the property, and it wasn’t long before prospective Eagles noticed opportunities for service projects.
“They fell in love with the space,” O’Brien said. “The more they worked with the farm, the more they recognized the farm’s needs. Space creation evolved naturally alongside our programs, and the boys were ready to help.”
Prospective Eagle Scouts with Troop 199 have built 10 separate service projects on the property since the farm’s founding:
· Pathways through the “Heritage Garden” – Ryan Emert
· The “Hen’s Haven” chicken coop – Scott Girard
· The “Peacepole Garden” – Eden Diver III
· Bat houses for the Heritage Garden – Patrick Alanarie
· New raised garden beds- Alan McMillin · Benches for visitors to the “Healing Hoop-House” – Drew Kuczera
· Information stations for visitors placed at each entrance – Jack Villeneuve
· A community garden with fencing, gates and raised beds – John Mueller
· Benches for the community garden, which double as storage containers for tools – Gabriel Diver
· A self-feeding food and water station for the Hen’s Haven – Owen Guillery
Troop 199’s committee chairman, Eden Diver Jr., said he was thrilled his two sons, Gabriel Diver and Eden Diver III, both elected to complete their projects at the farm.
“Mrs. O’Brien’s support of scouting and general positive attitude drew the boys to her,” Diver said.
Eden Diver III erected a fence around the property’s greenhouse and largest garden in 2018 to keep out grazing wildlife. Unfortunately, a severe storm destroyed the hoop-house, though the posts stood firm. When Clarkston Family Farm rebuilt an even larger hoop-house and garden, they left the posts standing; furthermore, local painters decorated the poles, transforming them into pieces of art. Today, the aptly named “Peacepole Garden” is a powerful monument to the farm’s relationship with local scouting.
Gabriel Diver’s project is among the most recent: “storage benches” in the Peacepole Garden. These receptacles for gardening tools double as seating for farm visitors. They are likely to see frequent use, as O’Brien said the farm has welcomed over 18,000 visitors in the past four years.
When the pandemic began, Troop 199 and the farm grew even closer. Many indoor meeting locations became inaccessible to scouting units, but Diver said the farm offered to let the scouts meet outdoors on their property. As of October 2021, the Clarkston Family Farm agreed to step in as Troop 199’s proud chartering organization.
“It’s a natural fit,” O’Brien explained. “I absolutely love to have their troop consider the farm their home. That’s awesome. They spend so much time there anyway.”
Diver noted with many chartering organizations, the relationship doesn’t go further than “don’t make a mess and turn out the lights when you’re done.” With Clarkston Family Farm, the boys and their parents enjoy a committed partner who loves scouting as much as they do.
O’Brien made it clear the farm is an ardent supporter of the scouting movement, and their relationship with Troop 199 is not an exclusive one. Many other packs and troops have used the property, and one scout from a neighboring unit, Troop 189, is already planning a 2022 Eagle Project at the farm.