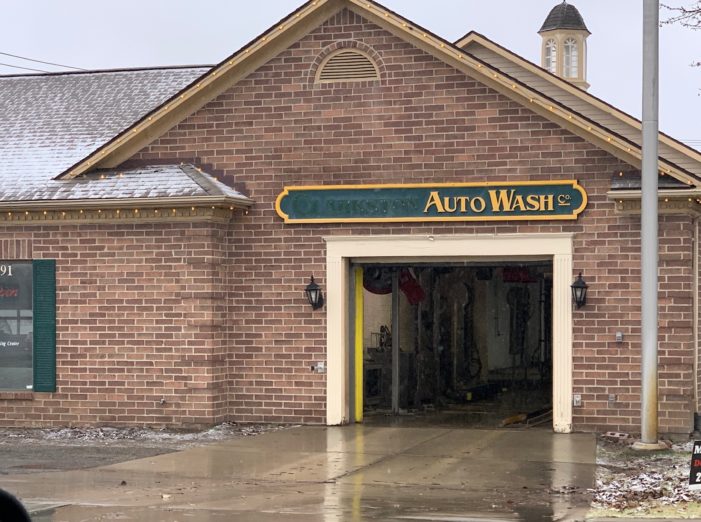 The former Clarkston Auto Wash is on the hook for $52,944 after a 30-year sewer-payment error was discovered.
Former owners Fred and Sheila Ritter appealed the bill to the Township Board of Trustees. The board voted unanimously, Nov. 26, to affirm it. Trustee Ronald Ritchie was absent.
The car wash was sold this past summer for $1,060,000 to Fresh Holdings, Inc. The charge-back stays with the property, so the new owner is responsible for the unpaid balance, said township Supervisor Pat Kittle.
An internal audit of DPW accounts in 2016-2017 uncovered the discrepancy in REU (Residential Equivalency Unit) charges at the Clarkston Auto Wash.
According to township ordinances and REU determination and assignment chart in 1988, when the car wash was built, a car wash with water recycling system has 8.4 REUs applied to determine sewer charges. If a car wash did not have a water recycling system, 33 REUs were to be applied.
After confirming no water recycling system ever existed at the facility during an on-site inspection, the full 33 REU sewer charge was applied to the car wash, effective Jan. 16, 2018.
In March 2019, DPW Director David McKee notified Ritter the township was going to charge Clarkston Auto Wash $52,944 for six of the 30 years of unpaid sewerage billings. The full 30-year charge-back was estimated to be a quarter of a million dollars.
Trustee Paul Brown said that in his nearly seven years serving as township treasurer, he never waived late fees or penalties on utility bills or tax bills and didn’t intend to start with the car wash.
“As soon as we make some kind of change to that (waiving penalties), how does that impact the future when other things can happen?” asked Brown. “We’re human and mistakes can happen. That would be my concern.”
“This has been a tough one,” Kittle said. “One, because of the time, and two, because of Mr. Ritter’s prior experience with the township.”
Fred Ritter served as a township trustee from 1974 to 1976 and was Township Treasurer from 1978 to 1984, responsible for the collection of taxes and utility usage fees before he opened his car wash in the township in 1988, Kittle said.
The DPW director in 1988, George Anderson, assigned an REU sewage factor of 8 for the Ritter car wash despite the facility not having a water recycling system.
“The ordinances were very clear at the time – you either had a water recycling system or you didn’t,” Kittle said. “What is the right thing to do on this? We’ve been absolutely consistent in that when errors are uncovered, we bill back.”
Lancaster Lakes apartments incurred an $80,000 bill due to paying 60 percent of an REU and a local resident ran up an $8,000 bill due to water running under her house after a pipe burst. Both paid in full with no discounts, Brown said.
The township sought payment on only the past six years due to the statute of limitations, said township attorney Steven Joppich of Rosati, Schultz, Joppich and Amtsbuechler, PC.
“Basically, dealing with the whole history here, I think our DPW director (David McKee) is trying to be reasonable and fair and view those legal indications in a light favorable to the system user,” Joppich said.
When the Ritters built the Clarkston Auto Wash at 6791 Dixie Highway in 1988, the state required a sand/grit separator collection pit.
In his appeal to the Township Board on Oct. 22, Ritter said he did not think this charge-back was fair.
He paid at the 8 REU rate because he was told by Anderson his facility and grit tank met the “intent” of the ordinance. Anderson is now deceased.
McKee said intent was never a part of the ordinance or any of its amendments.
The township is charged by Oakland County for total sewerage flow, so the car wash was effectively subsidized by the rest of the township, Kittle said.
“Mr. Anderson must have made a mistake or an error in this matter,” Kittle said. “There must have been some expectation that the car wash was going to install a water conservation and water recycling unit, which its plans appear to have contemplated in some ways. Otherwise, Mr. Anderson would have been acting illegally by allowing the car wash to deposit more wastewater than it was paying for, which is also a basis for correcting and collecting the unbilled amounts. At best, there was a mistake or erroneous determination made by the DPW back in 1988.”
That mistake continued forward with all subsequent billings to Clarkston Auto Wash until it was corrected in Jan. 2018, he said.