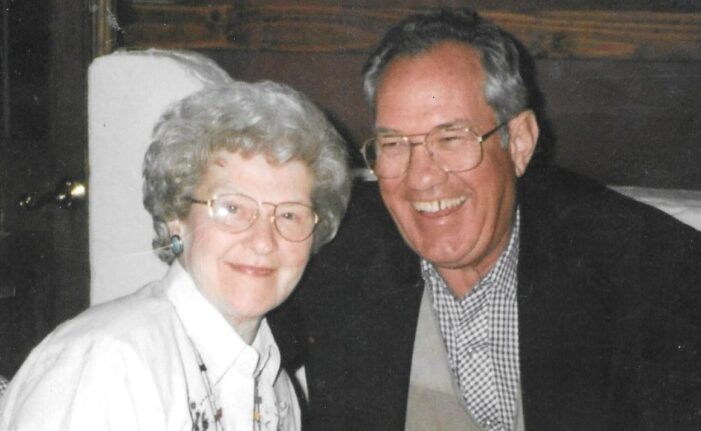 It’s been one heck of a run for one local newspaper publishing family, and this week that run comes to an end.
For 67 years, members of the Jim and Hazel Sherman family have had their hands in publishing weekly, community newspapers under the Sherman Publication, Inc., banner. As of April 1, a new chapter in community publishing begins for our area. Sherman Publications is now part of the View Newspaper Group.
Jim and Hazel Sherman started their publishing career in 1955 when they became just the second family to own The Oxford Leader, purchasing the community weekly from Emigh (Henry) and Myrtle Congdon. The first edition of The Leader was published on Dec. 9, 1898.
In 1986, Jim Sherman, Sr. said of the newspaper business, “Whatever success we enjoy, the community made it possible. We’re so very pleased we made the decision in 1955 to make Oxford our home.”
The Sherman family’s lives revolved around the newspaper business.
“It’s an everyday and many night habit,” Sherman, Sr. said in 1986, “One we enjoy. With the growing from three employees to 46, with circulation gains from less than 1,000 to over 48,000 weekly and annual gross sales climbing from $28,000 to over $1 million, it better be enjoyable!”
From The Leader, five other weekly papers came under the Sherman blanket. The free circulation Ad-Vertiser was started in 1960. In 1966, the Shermans purchased The Clarkston News; in 1971, they acquired The Lake Orion Review; in 1982, they started another free circulation paper called The Penny Stretcher.
In 1999, Sherman, Sr. shared his philosophy on community journalism, “Some say our area is small, and they ask how we can find news to fill our pages. We believe everybody in our town has a story to tell, whether it’s a life experience, an interesting hobby or a milestone. There is plenty of local news and as a local newspaper business, it’s our job to report it. We believe in giving back to the community.
“We’re a community newspaper that believes in community.”

The Shermans raised their children, Jim Jr., Luan Offer and Susan Speed in Oxford and in their newspaper business.
Jim and Hazel Sherman ran the news group until he retired from publishing in 1993, handing the reins over to his son.
Jim Sherman, Jr. served as publisher of the group until last Friday. Luan has worked as office manager for two decades as her mother did before her. Susan has been in charge of the composition department since the 1990s.
With the Sherman children running the family business, Sherman Publications grew to include two more publications.
They started the weekly newspaper for Ortonville/Goodrich area, The Citizen, in 1995. In 2008 they created the monthly coupon magazine titled The Big Deal.
In their nearly three decades of stewardship of the family business, Jim Jr., Luan and Susan adhered to their parent’s values of delivering relevant, local news to their readers, including the stories of life’s milestones of those readers.
For example, they made it their goal to get the name and accomplishments of every area high school senior into their newspapers.
They continued giving back to the communities they served through support of local nonprofits, schools and business groups.
The View Newspaper Group will continue and grow the tradition of community journalism in our area as they plan to keep The Leader, Review, The Citizen, Clarkston News, Ad-Vertiser, Penny Stretcher and Big Deal titles.

TOP PHOTO: Hazel and Jim Sherman started their publishing career in 1955 when they became just the second family to own The Oxford Leader, which started publishing back in 1898.