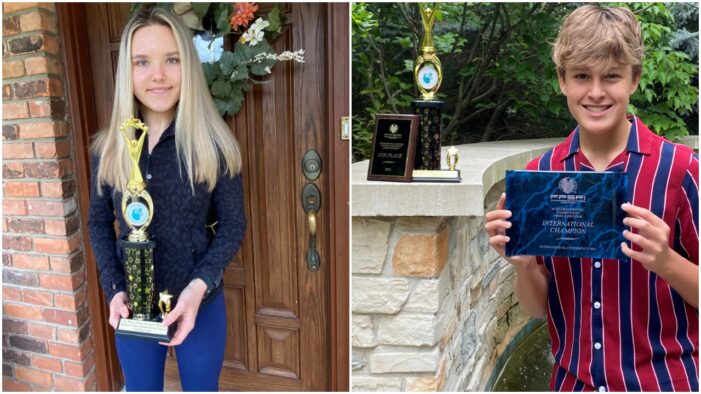 Clarkston siblings Mark Bokas and Sasha Bokas participated in the 2021 Michigan Future Problem Solving Program competition through the Clarkston Community Schools chapter and each brought home hardware.
Both competed in scenario writing (Mark in the middle division, 7-9 grades, and Sasha in the senior division, 10-12 grades), while Mark also competed in a cover design. The scenarios had to be under 1,500 words and written in relation to one of the four themes provided by Future Problem Solving Program International for this year.
The CCS chapter was facilitated by teachers Kristine Butcher and Monica Phillips.
At the Michigan State Bowl Awards ceremony that took place virtually in March, Sasha was announced the state winner in scenario writing in the senior division, while Mark won the middle division and the cover design. As state winners, the kids received an invitation to represent Michigan at Future Problem Solving Program International Conference competition last month, with Mark taking first place. In addition, their winning scenarios advanced to the international round of judging where Mark placed fifth.
“I competed in Michigan FPSP program for three years, and scenario writing was not something that I previously considered because adding elements of a story to a problem analysis seemed complicated,” said Mark, going into tenth grade this fall. “There are many talented writers in Michigan and other states and countries that participate in the program, so I was really unsure. Winning the state, placing in the top 10 internationally, and then getting the first place at the international conference still seems unreal and beyond anything I could have imagined.”
“This was my second year participating in scenario writing in the senior division,” added Sasha, a senior who was a state semifinalist in 2020. “This year, the theme I selected, personalized medicine, had a strong personal appeal to me. I would like to pursue a career in the medical field, and writing a scenario that required researching and foreseeing potential problems that personalized medicine can create was both challenging and engaging.”