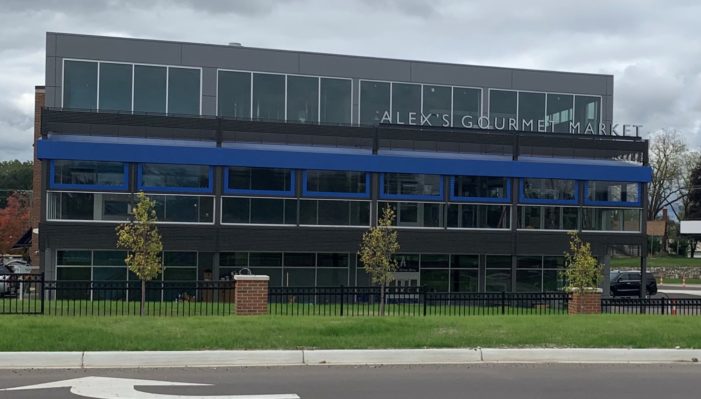 After nearly three months of debate, the LED sign proposal at the new Alex’s Market and Grill has been approved.
The unanimous decision of the Independence Township Board, Oct. 22, allowing an electronic message board runs counter to the recommendation of the township Planning Commission.
“We respect that board and its work, but it doesn’t mean we have to do what they tell us,” said Trustee Paul Brown. “The authority to disagree is put in place, that’s how the township is run. There’s not anything wrong with it – sometimes, people disagree. Ultimately, this board gets to make that decision, and, in fact, all members of the Planning Commission are appointed by this board.”
The proposed sign will include 12.5 square feet of electronic messaging, which is approximately 25 percent of the overall sign size.
The Planning Commission’s recommendation, July 11, was that a changeable copy LED messaging sign constituted a major PUD amendment, requiring Township Board approval.
On Aug. 8, the commission said conditions for approval should include specific districts for LED signs, cleaning up old signage, no scrolling, flashing or multi-colors, limited text changes, and brightness should be reduced at night.
First reading by the Township Board on Sept. 10 included most of these Planning Commission stipulations. A separate motion directed the Planning Commission to work with township planner Brian Oppmann to prepare and make its recommendations to the board for amendments.
The Planning Commission is currently studying regulations for electronic message boards, said Planning Commission member Sam Moraco.
“We’ve been working on the sign ordinance forever,” Moraco said. “There might be other restrictions you want to put on – I’ve been on the commission almost 17 years and it’s very unusual that we go against the Planning Commission, so something is a little different right there. That’s a red flag.”
Any sign that is distracting goes against the ordinance, Moraco said.
“We just can’t understand the timing behind it,” he said. “Why is it so critical that they (Alex’s Market) get this right now? We haven’t established our districts and we haven’t established the regulations,” he said. “I think we’re jumping the gun, and I think we’re getting pressure from the petitioner because of my involvement. They feel they’ve been violated by me advocating to follow the ordinance.”
Most complaints about these signs is that at nighttime, the brightness is a distraction, he said.
“This is a 24-hour business and you’re about to give them a 24-hour changing-text sign without any limitation to that,” he said.
Dave Endreszl, a local civil engineer who has lived in the township over 40 years, also voiced his distaste for the LED sign.
“I think it’s an unnecessary distraction, especially from a safety standpoint,” said Endreszl. “Flashing lights are kind of reserved for road construction projects where they need to get the attention of the driver that the lane is closed ahead or whatever else. Someone driving down White Lake Road and sees a ‘fresh-cut flowers’ sign, it’s going to draw the attention of the driver when it’s not really needed.”
Township Trustee Ron Ritchie noted there are changing-text signs in the township already.
“I’m not in favor of neon flashing signs or signs we see that Sam had alluded to, that are in Waterford and other places,” Ritchie said. “We do have changeable-text signs now – Pine Knob changes theirs multiple times a day sometimes.”
“I know when the Planning Commission did make the decision to turn this over to the board for a decision, distraction was one of their issues,” added Township Supervisor Pat Kittle. “I think the petitioner initially wanted 30 seconds and I think (Richard) Carlisle (of Carlisle, Wortman and Associates planning firm) said the minute we change it to two minutes (when text will change), there are provisions in the ordinance revisions to create some districts where these signs would be limited.”
Specifics are still to be determined, according to Carlisle, who noted a series of workshop meetings are planned with the Planning Commission regarding the signs issue, starting Nov. 7.
“This is a comprehensive ordinance revision,” said Carlisle. “We’re not just dealing with electronic message signs. We’re dealing with a variety of aspects.”
Board member Terri Nallamothu said a worker on a ladder changing the sign at DTE Energy Music Theatre is more distracting than a flashing sign, while township treasurer Rachel Loughrin added there are businesses on Dixie Highway she won’t visit because of their signage.
“I can’t stand those bright, flashing, flipping, crazy signs,” Loughrin said. “I think that it’s rude and I think that those types of signs are a distraction.”