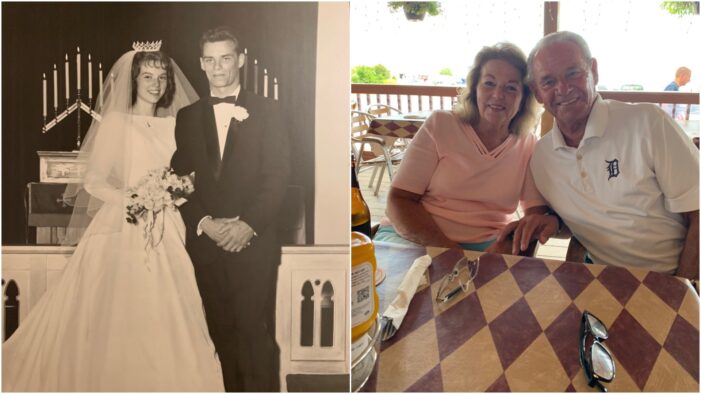 Linda and Richard Lamphere recently celebrated their 60-year wedding anniversary with a trip to FireKeepers Casino Hotel in Battle Creek.
The couple, married November 12, 1960 at St. John’s Lutheran Church in Pontiac. They moved to Clarkston in 1963 and have lived there since.
“They’ve stayed in Clarkston because their family is all around the surrounding areas – Clarkston, Ortonville, Goodrich, Grand Blanc, Oxford, Waterford – and they would never move away from their family,” said Kathy Lamphere (Sowles), the youngest of the Lamphere’s four children.
“They spend winter months in Florida sometimes, but that’s the extent of leaving us.”
Linda Lamphere retired from Oxford Schools as an administrative secretary, while Richard is a retired sales manager from Oakland Engineering Filtration. He was also a coach for the Clarkston Chiefs youth football program from 1970-81.
“I asked mom what the key was to a successful marriage and she said to like the person,” Kathy said. “She not only loves my dad but liked him then and even more now. What brought them to Clarkston was the location and the word of a great school system – even back then – and figured what a nice place to watch their four children grow.”
Along with Kathy, the other children are Debbie Lamphere (Eddy), Richard Lamphere, and Cheryl Lamphere (Miller). Grandchildren are Jessica Wright, Jonathon Wright, Brittany Miller, Blake Miller, Sarah Lamphere, Paige Lamphere, Sophia Sowles, and Izzy Sowles. Great-grandchildren are Zoe Wright, Jonathen Erickson, Addyson Kell, and Mina Cady.
“We can’t be any prouder of our parents,” Kathy said. “They are simply our inspiration and a perfect example of what parents should be. We can’t say enough about them but truly wish them many more years of blissfulness.”