SoleMates collect shoes to walk in others’ footsteps 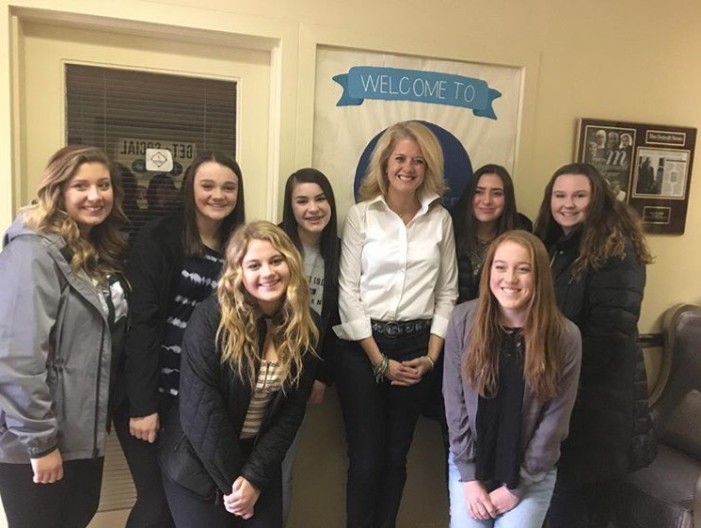 BY JESSICA STEELEY
Clarkston News Staff Writer
Clarkston SoleMates are bringing the community together by sharing stories from other people’s perspectives.
The group is made up of seven Clarkston High School 10th graders, originally formed as part of a class project for Honor’s English Language Arts 10.
“Our project was based off of the question ‘What can you learn from walking a mile in someone’s shoes?’” SoleMate Kelsey Schaldenbrand said.
Fellow SoleMate Sydney Scarpelli said the project started with their class reading “To Kill a Mockingbird” by Harper Lee.
They chose to center their project around a lesson the main character, Atticus Finch, taught to his children about walking in someone else’s shoes before judging them.
“Since it was walk in someone’s shoes, we decided we’d collect shoes, and then donate to somewhere that’s less fortunate to show understanding,” Scarpelli said. “SoleMates came from, it’s like S-O-L-E, the shoe.”
Schaldenbrand said to help them see from another’s point of view, they interviewed a person staying at Grace Centers of Hope, where they donated the 346 pairs of shoes they collected.
“It was eye opening how nice he was and friendly,” SoleMate Jessie Greatorex said. “Everyone at Grace Centers of Hope, they’re recovering drug addicts. The guy we talked to just finished the one year program so he was recovered and it was super inspiring because he didn’t really seem like what people would picture someone like that to be.”
Greatorex said the man they interviewed had been in jail a few times, and she felt people would judge him for it.
“He said he couldn’t find work that’s why he came to the center because no one would hire him because they knew he was in jail,” Scarpelli said. “They didn’t give him a chance.”
The girls have only interviewed one person so far, but they plan to volunteer at Grace Centers of Hope and get more stories.
“We’re taking it past the grade,” Greatorex said. “We’re going to keep volunteering at Grace Centers of Hope and keep collecting stuff.”
Volunteering in the kitchens and the daycare are some ways the SoleMates plan to stay in contact with the center. They also hope to donate more items in the future, such as perishables and grocery gift cards. Though the group was only created around two months ago, the girls hope to continue their work throughout high school and possibly beyond.
To help others put themselves in another’s shoes, they’re publishing the stories they hear on the Clarkston SoleMates website. They also have Twitter and Instagram.
“We’re trying to bring a point to people, show them there’s more to someone than just what you see and that everyone has their own story. It sounds cliché, but we learned about the guy we interviewed. His story was so much different than we would have ever imagined,” Schaldenbrand said. “You never would have thought he would be doing that kind of stuff and he would have been in jail until he told us his story.”
Scarpelli and the SoleMates view Clarkston as divided by class and race boundaries, and think both sides judge the other without considering life from their perspective.
Even the students caught themselves making assumptions about how Clarkston residents might view a person on the street, showing anyone can judge people, sometimes without even knowing.
“We’re also at fault for not walking in other people’s shoes, which is what we’re trying to do and this is what we’re trying to show people,” SoleMate Sam Chambers said. “Everybody does it.”
Everybody judges a “book” by its cover, Chambers added, and the SoleMates are trying to present an alternative option, not only to their class but to their community.
Greatorex thinks it’s important for people to look past their thoughts about other people. “Like thinking of other’s situations before you judge, break those boundaries because we’re all people.”