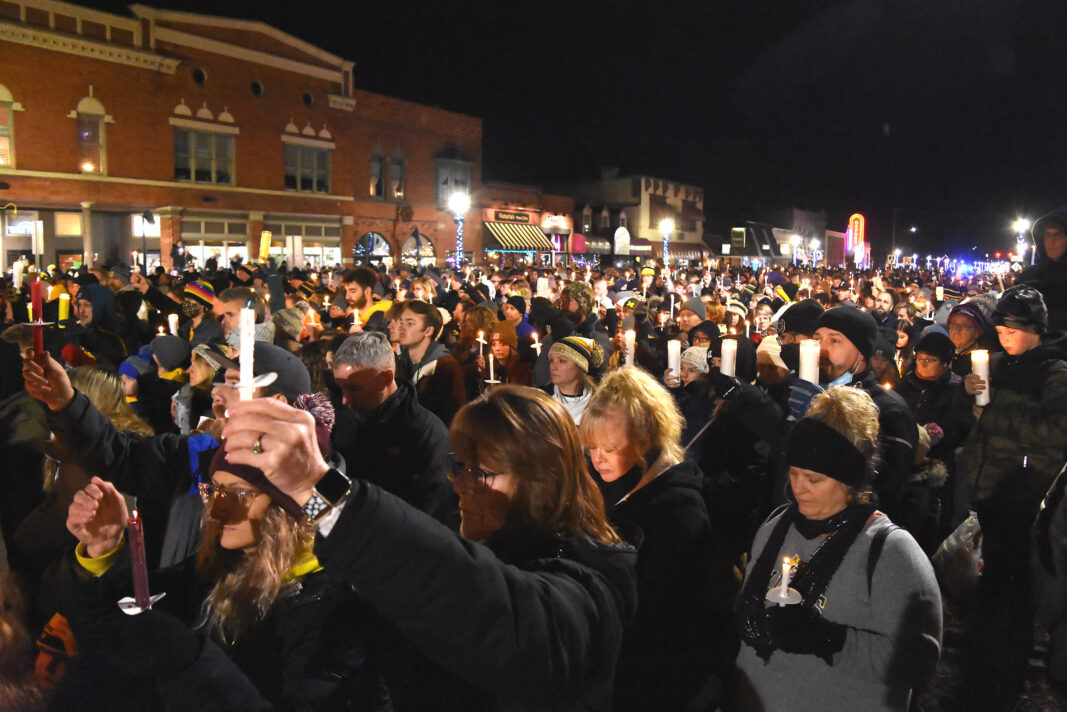 Yeah, about two weeks ago I had envisioned writing a funny little Christmas season column on red underwear, but I have shelved that notion. Still haven’t gotten back into the “humor” writing mode. Oxford, the events of Nov. 30 and the families devastated still fill my heart and my mind.
I don’t feel funny much anymore.
I keep asking my reporters in Oxford how they are doing. I know they have feelings, too and to do their jobs they need to talk to people affected by the shootings and they need to write about the shooting nonstop. I’m sure because they are fine young men, being immersed in the tragedy also weighs heavily on their hearts.
Of course, when I close my eyes before falling to sleep, in my silent prayers Oxford comes to mind. I pray for forgiveness, for the community’s healing and for strength. I pray to do my best to help this community in the small, detached way I can — which is at a keyboard putting together the community newspaper.
We’re doing the best we can, and yet I am sure we can do better. I hope readers understand we’re human, too. We are not perfect (though, I always want to be and when I fail at perfection it really whizzes me off). Do you guys know what editorial resources we have at our disposal for The Oxford Leader newspaper? We have a full time reporter (Dean Vaglia — who has worked for us about a year) and full time reporter (James Hanlon, who has worked for us a couple of years). Oh, and me. The evil puppet master pulling strings to get a quality paper out the door, on time and at a profit.
And, that is it. We’re a “mom & pop” operation, a small family-owned and operated business.
I think they have done a heck of a job the last couple of weeks. I asked them to do more, write more and to get their stories to me quicker than normal deadlines would dictate. They did good, I appreciate them and their efforts.
* * *
It has been hard on the entire community. Harder on some more than others. And, in my nightly prayers I pray for folks here to heal, to reflect and to love one another. I am not sure how a community with so many people of diverse backgrounds and ideologies can go through the five stages of grief and loss at the same time, together. I guess this would be called being ‘in sync,”
Denial and isolation, anger, bargaining, depression, and acceptance. Some can and will go through this quicker than others. Some may skip a stage and then go back. How does a community heal together, or is that even possible? What does it take? Because at different times throughout the process there will be folks in the anger stage, looking for a person or something to blame. They will lash out and it won’t all be at the same time, it will go on and on until everyone in the community has gone through the process.
I guess one way we can help each other is to understand (or at least try to understand):
1. No one is perfect;
2. We don’t know what an individual is going through at the time we engage them; and
3. Step back, reflect and offer empathy.
* * *
Received this email last week.
Don,
Regarding subject and your column ‘As the nation turns its eyes to Oxford,’ I would offer:
I am as angry as I have ever been in my entire life over action taken by a self absorbed individual. Perhaps it’s because two of my grandchildren are recent student athlete graduates of Oxford and they are sad, devastated/confused and, yes, more than a little angry themselves. Their state of mind has caused my own to “go dark;” probably because I feel so bad for them and can do nothing to help restore some portion of the spark of effervescent youth they’ve lost. Life experience assures me that “it will get better” but instinct tells me that it will never-EVER-be as it was! My guess is that there are a lot of folks that feel the same way.
In the days since the shootings, there has been the totally understandable constant drumbeat of coverage by local and national media seeking to report the “latest breaking developments”…. even when there weren’t any. A prayer vigil was held that was attended by many people seeking some sort of solace in a gathering of so many in such pain! Unfortunately, every politician within travel distance attended and proceeded to jump in front of live cameras to tell all of us how badly THEY felt and it frankly diminished the occasion as they attempted to co-opt the incredible angst experienced by those directly affected … children and their parents.
Now, the second guessing and “woulda coulda shoulda” discussions and lawsuits have begun and national newscasters have started offering opinion vs simply stating journalistic facts as you referenced in your column.
It’s a shame you feel compelled to defend yourself as it’s been my experience that you offer true journalism i.e.; reporting of facts unsullied by opinion. Thank you for that!
Stephen S., Clarkston
Thanks, Stephen. Keep the faith everybody.
Send comments to DontRushDon@gmail.com

Sooner or later it will be time for us to breathe, reflect and love added by Don Rush on December 15, 2021
View all posts by Don Rush →