The Legend of Lost Buttons

“Let’s go to the edge of the forest and pick berries,” he said.
“It is long past berry season. They’ve all been picked and made into jam,” she replied.
“Then let’s take a walk into the forest and gather chestnuts for roasting,” he said.
“There are no chestnut trees in our forest; only oak trees, and the acorns have long since lain on the ground or have been eaten by squirrels.”
“Well then, let’s go far into the forest, I’ve wanted to show you a special fallen log where beautiful wooden buttons grow out from where its bark has rotted away,” he further coaxed. “It’s magical to replace a lost button with one from the log.”
She knew he was trying to entice her to be alone with him.
“Wooden buttons growing in the forest?,” she exclaimed. “I have lost a wooden button from my sweater.”
“See, here, the third one down is missing.” 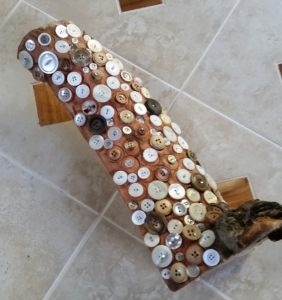 She was, in fact, very intrigued by him, and would have rendered a garment free of all buttons, just to have reason to go with him. The two walked hand-in-hand for a long way into the forest. She anticipated that he would stop at some point to kiss her and confess that there was no magic wooden button log.
She had become tired of walking and was about to initiate their first kiss herself, when he extended his arm to point ahead of them toward a log on the ground. Hundreds of buttons adorned a log. She could clearly see that rather than growing from its surface, each had been nailed in place.
Continuing playfully with his tale of deceit, she demanded, “You promised me a magical wooden button; there are some wooden ones here, but also mere plastic, certainly no magic.”
Not realizing that admitting the truth was best, he made it an opportunity to brag of his prowess, “I have taken many a young lady into this forest, loved or not, we shared a magical time here, that none of them will forget.”
Instead of be impressed by his male gloating, she asked, “What has that anything to do with this log of buttons?”
“Well, you see,” said he, “Loved or not, willingly or by force, I took a button from a garment they wore that day, each button nailed to this log as a reminder of something far greater which I had taken from them.”
“For each young lady, forever from a day in the forest, something missing, perhaps just a kiss or her life, like a lost button reminder.”
Staring at the log, the hundreds of buttons – suddenly she was repulsed by the thought of the moments or hours spent here – hundreds of others had come into this forest with him, shared passion turned to lone fright; a young life however changed by one incident, now represented by a tally mark, a button.
Running without direction, other than away from him, she fled, with his laughter echoing in the forest behind her.
He had mockingly grabbed for her; but, when she turned quickly to run, he only made a short run behind her, until laughing and tripping, he purposely fell unto a mossy patch of forest floor. He continued to laugh at the well-rehearsed joke he had played on her.
He planned ahead how he would eventually tell her the truth that he had long ago found the strangely adorned log in the forest. He had never found any need to decipher its origin. He had never told anyone else about it.
He thought of how she had perhaps believed his tale about the hundreds of young ladies before her, because maybe she did think he was handsome. He looked forward to being able to tell her that she was the only one for whom he ever cared; the only one who had ever ventured into the forest with him; the only one to see his discovery.
There was a shift in the sunbeam coming through the tree canopy above him; as if just as leaves opened a path of light directly onto his face, a more solid object suddenly cut the light completely.
He cherished the moment, with eyes closed, to lay back and let sunlight dance on his face. He didn’t want to stay long, he didn’t like to be alone. To open his eyes, and see that a solid object, a being, was standing over him, blocking the sunlight, was shocking, bolting him upright to sitting.
He had had a moment, until his eyes adjusted from glare to overcast, to hope that it was she, his one true love, returning to forgive him and share a laugh about his concocted escapade.
But it was not her standing over him; to describe the physical characteristics of the being, is something he has never put to words.
He has only been able to describe it as dark; faceless but having eyes, making the surrounding air cold; yet before a shiver, he felt heat exuded from the being before it spoke, “You have found my Lost Souls Log. You have been here before, you found it before today, but you didn’t stay long; as now, you are alone, you don’t like to be alone, you always have a bit of fear.
“Loved or not, willingly or by force, I have taken a button from each person who has entered this forest, whether they were truly lost and alone, I made it so. Each button is a reminder of each lost soul who I never let return home from this forest. Now, it is time for me to take one of your buttons; there, that one, the third one down.”
(Footnote: Local police had taken the log as evidence. Somehow, over the years, it had passed from authorities to unknown parties. Attempts have been made to trace the buttons to victims; but buttons are a common part of attire, hardly something to distinguish individuals. The best we can hope, is that whomever currently has possession of the Lost Souls Log, or Lost Button Log, will care for it, lovingly or not, as she would for those who lost their way in the forest.)