The value of commitment 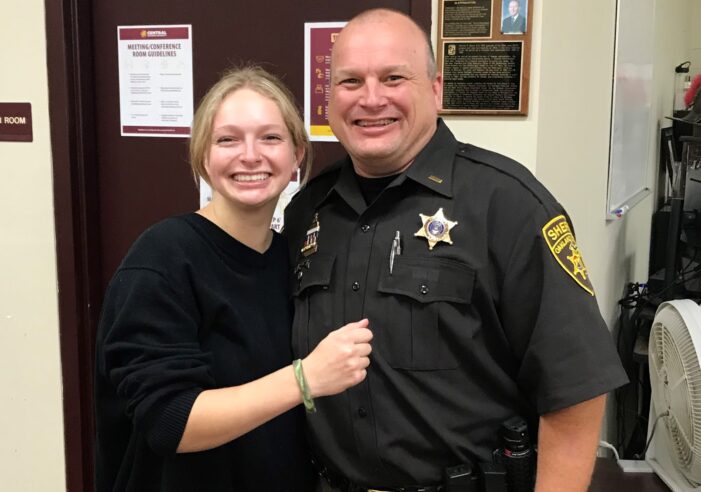 Ask Central Michigan University freshman and 2021 Clarkston High School graduate Paige Workman about commitment.
Better yet, ask her father, Paul Workman. He has seen and lived it firsthand – just about every day, save for 2008-09 when he was stationed in Afghanistan at Bagram Airfield as the Headquarters and Headquarters Company Commander of the 783rd Military Police Battalion while serving in the U.S. Army Reserve.
For the past 13 or so years, Paige’s wardrobe has included a rubber bracelet. She put it on when she was four as a daily reminder that her father and other service members were away from their homes and their families. The bracelet was inscribed with “Paul” and “Blessed are the Peacekeepers.” Paul’s wife Holly had the bracelets made to hand out at Paul’s going-away party.
When Paul, who is a lieutenant in the Oakland County Sheriff’s Office, returned from active duty, he told Paige she could retire the bracelet. She refused. The five-year-old told her parents she was committed to wearing it until every U.S. soldier returned home from overseas.
That meant wearing it to school, while out with friends, competing in CrossFit, off to college at Central Michigan University – everywhere. That is, until September 26, her 18th birthday. The bracelet – her third as she had worn out the others – simply broke. Unlike the other times, she had no replacement. She was devastated. She tried to fix it with tape. She called her parents in tears.
They offered to overnight her a new one, but then dad had a better idea. He would hand-deliver a new bracelet to her during one of her classes at CMU where she is enrolled in the ROTC program.
Two weeks ago, Paul gave a heads-up to the campus police, Paige’s professor, and with the blessings of Oakland County Sheriff Michael Bouchard, drove to Mount Pleasant to deliver a new bracelet himself. He surprised her in her class, told her he was there on behalf of the sheriff, explained to her classmates why he was there, and presented her with a new bracelet and a spare, just in case.
Her classmates applauded as Paige tearfully embraced her father.
“I am amazed that she would make the commitment at five years old and hold fast to that commitment,” Paul said. “I barely commit to anything that large scale at 48 years old. It makes me proud that she appreciates the military and understands their sacrifice. At a time when people can be very self-centered, I am blessed that she remains grounded and humble.”
Sheriff Bouchard praised both Paige and her father.
“In a time when many seem to have lost faith in numerous things and the word ‘commitment’ is often abandoned when things become difficult, this family epitomizes the best of what it means to be an American,” Bouchard said. “It’s a personal commitment to make a difference and faith that our efforts support and defend the greatest country on the planet. They exemplify public servants. I am proud of them.”
The Workman family moved to Clarkston in August 2003, just before Paige was born.
“The house we live in was my wife’s grandparent’s (Jack and Evelyn Craven) house,” said Paul. “After they passed on, we had the opportunity to purchase it from the family.”
Holly’s mother and two uncles, Darlene Malek (nee Craven), John Craven (taught at Clarkston Community Schools) and Dan Craven, grew up in the house as well.
“We stayed in this home because we like the community in general,” Paul said. “We liked the stability of staying in one house to raise our children. My wife has worked as a counselor in this area for over 20 years and currently owns Action Works Counseling, PLLC within Clarkston, so we are quite vested in the township.”
Paige and her older sister Hannah attended Clarkston Elementary, Sashabaw Middle School, Clarkston Junior High, and Clarkston High School.
The Workman family also includes the family dog, Brandy.
Paige recently shared her bracelet story during her Communications 101 class, giving a public speaking presentation.
She’s had quite a story to tell.