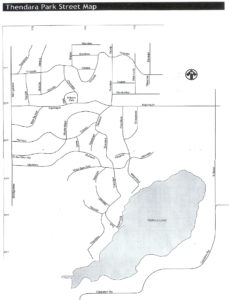 Several streets in the Thendara Park/Sunny Beach Country Club area will be paved soon.
At the Aug. 6 regular meeting of the Independence Township Board of Trustees, Thendara Park resident Jeff McGee gave a rundown of the paving and re-paving projects that should begin in the immediate future.
“We have submitted petitions to seek the township’s taxing authority through a special assessment district (SAD) to essentially lend our neighborhood (the houses in the assessment district) the funds needed to pave the majority of the remaining private dirt roads and repave some of the existing paved portions that make up the SAD,” McGee said. “We have received an overwhelming vote of support by the affected property owners and have the approval of the Township Board to now commence the project.
“It is our hope to initiate the project this year.”
McGee said he will be working with contractors and residents in regard to any issues that may arise.
In two separate public hearings as part of the Aug. 6 meeting, some residents approved the paving projects, while others strongly opposed.
“Last fall, we had meetings with residents of Thendara Park and Sunny Beach, and they presented petitions for the improvement of portions of those subdivisions – one is for new paving and one is for re-paving,” said Independence Township Director of Assessing Kim Feigley. “We’ve gone through all the statutory requirements, held the first public hearing and addressed concerns and attempted to resolve as many of those as we could.”
Some of the residents had concerns over unit of benefit and splitability of lots, said Feigley.
“We’ve addressed as many of those as we could, that I felt I could address and be fair to all residents in the sub,” noted Feigley. “Jeff McGee has put in a ton of work with engineers and has met with some of the residents regarding engineering concerns, drainage concerns, catch basins, that sort of thing. At the first public hearing, there were concerns regarding the language on the petition and a private road SAD is unique in the fact that this association was assuming the contracting of the engineers and taking over the design and improvements themselves versus a regular road SAD where we would be contracting engineers, or RCOC would. Normally, in a typical special assessment district, the township receives the petitions, verifies the need and the sufficiency for that improvement and then we would go out for engineering and specs.”
Several Waw-Ban-See Road residents – Jeffrey Corbin, Janson Manning, Tarah Manning, Dorrie MacColeman, Daniel MacColeman and James Prescor – voiced their opposition in a letter submitted to the Township Clerk’s office.
After the public hearings, both resolutions were passed unanimously by the board.