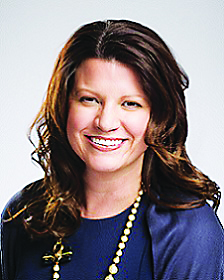 For more than three years, Rachel Loughrin served as the treasurer for Independence Township.
Recently, Loughrin stepped down from her role, leaving the township to find a replacement and fill her term that expires on Nov. 20, 2024.
“I’m leaving the position of treasurer for the same reason most people leave a position,” Loughrin said. “The city of Pontiac has offered me a position with higher pay to do a job that I love. As much as I would like to stay and fulfill my term, I can’t turn down this opportunity.”
Loughrin did not disclose what the position in Pontiac entails.
Joining the Independence Township Board of Trustees in Nov. 2016, Loughrin was appointed treasurer June 4, 2019 at the trustees’ regular meeting and took the oath of office two weeks later. She replaced Paul Brown, who had resigned that May. Brown later returned to take Jim Tedder’s trustee spot when Tedder resigned to take new employment.
Loughrin’s financial background includes time serving as the city of Pontiac’s director of economic development and as an Oakland County business development representative, in addition to serving on various planning and land use positions in the state of Arizona. She is also a licensed real estate agent in Michigan.
“I have spent a great deal of time working in different facets of municipal government throughout my career and have very much enjoyed the time that I have spent working in the township as a township board member,” Loughrin told the Clarkston News in June 2019. “I chose to apply for the treasurer position because I saw it as an opportunity to put my skills to good use and to become more active in the community in which I live.
“What I have seen on the board that makes us a very cohesive group could maybe be better answered by talking about what I have not seen on the board. What I have not seen is a bunch of political wrangling. I have not seen board members talking over each other or trying to outdo one another for political gain. This board is a cohesive group because it is made up of citizens whose only interest is to work together to make our community a better place to live.”