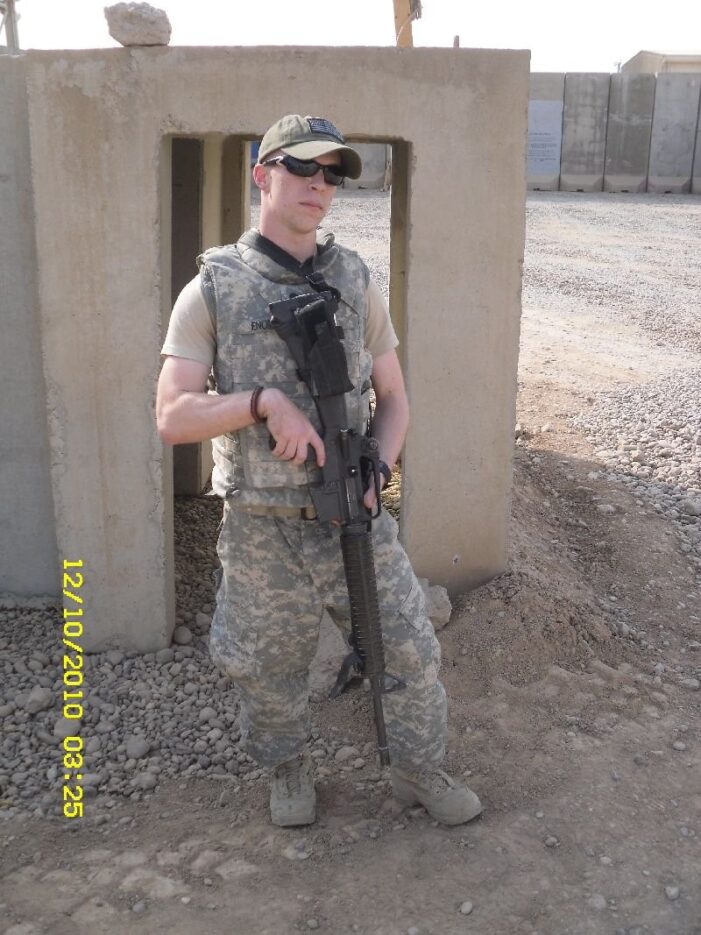 Jared Enochs enlisted in the U.S. Army in 2007 to serve his country and to get away from his small hometown in Tennessee.
Now 14 years later, the 31-year-old Clarkston resident has a laundry list of health issues and says no assistance is available after he was exposed to a toxic burn pit while serving in Iraq.
“Iraq was hot the first day off the plane and felt like I walked into an oven,” said Enochs, who was stationed on Joint Base Balad from March 2010-April 2011. “During that time, I was assigned to the 298th Support Maintenance Company to support base operations under the 103rd Expeditionary Sustainment Command and 25 field artillery regiment. Our unit was tasked with amnesty yard as well as waste disposal. We had been tasked to take the influx of Conex containers being shipped in from all the closing bases and operating outposts across Iraq to then sort and discard any equipment that couldn’t be sold to the local nationals or sent back home to the states.
“We would then bring all that to the giant open burn pit where it was incinerated with jet fuel. This pit burned 24 hours a day all 13 months I was stationed there. The plume of black smoke could be seen from miles away. The smell of burning plastic and other materials was overwhelming. It wasn’t until I was leaving the country that we all got the burn pit letter of exposure to be added to our medical records.”
These days, Enochs suffers from such issues as fatigue, abdominal pain, low white blood cell count, anxiety, depression, vitamin deficiency, neuropathy, blurred vision, allergies to rubber, and muscle spasms, and is unable to work. He has been relying on short-term disability from his civilian job with FCA.

“Over the last ten years, my health has declined,” Enochs said. “I started to seek care from the VA in Ann Arbor in 2011 for gastrointestinal issues after three years of seeking treatment with no real diagnosis. I felt the VA was running me around in circles and went to a private doctor for care. That was when I started to get some answers on some issues. I had tried to get traction with VA for several years. It wasn’t until recently I started to seek treatment again with the VA in Detroit but haven’t been having much luck with COVID.
“All their doctors are now only on telecom appointments that are six months out. But dealing with the primary care doctor I had last time, he just argued with me over the medical evidence I brought in to try and start a claim for burn pit exposure, and then had me and my wife (Jennifer) escorted by a police officer to the mental health ward, treating me like I was a harm to myself. Biggest slap to my face as a veteran. I haven’t gotten a reason for the way they treated me. My case manager suggested getting another doctor under the VA but at this point, they make it more trouble than it’s worth to get the treatment you need. It almost feels like they would rather draw out the process in hopes I die before I get the benefits I deserve or give up trying. Life’s been hard but the VA makes it harder.
“Currently, I have been through a rheumatologist, hematologist, neurologist, cardiologist, urologist, dermatologist, eye doctor and gastroenterologist, still seeking follow ups with all of them trying to figure out what is causing this. I have been unable to work and now use a cane to be able to stand and walk long.  I have been forced to pay for medical bills over mortgage during this COVID crisis just to make sure I can get treatment with the danger of losing my home.”
Enochs is currently working with his old Army unit to fix his discharge to allow reentry to service to have everything connected to service. He is still seeking a specialist to slow down the process of what is happening to him in hopes he can have a comfortable living.
“Moving forward, just trying to not give up on life has been a slow, long battle,” Enochs said. “I’m just hoping I can live long enough to get compensation for all those who served under these conditions and bring light to the environmental hazards that they send our troops into without knowing what adverse health effects come along with it. As of today, the Department of Defense still won’t acknowledge the health issues with their open-air burn pits but have measured toxic levels in air sampling on any base that used this practice. This is just as bad as Agent Orange exposure. It might be many years before we get anything, if we can live that long.
“I hope my story can reach other fellow service members to hopefully get checked out or sign up on the burn pit registry in case they have complications later in life from being around these exposures.”
A GoFundMe has been started to help Enochs with medical bills HERE.