Trio up for National Merit scholarships 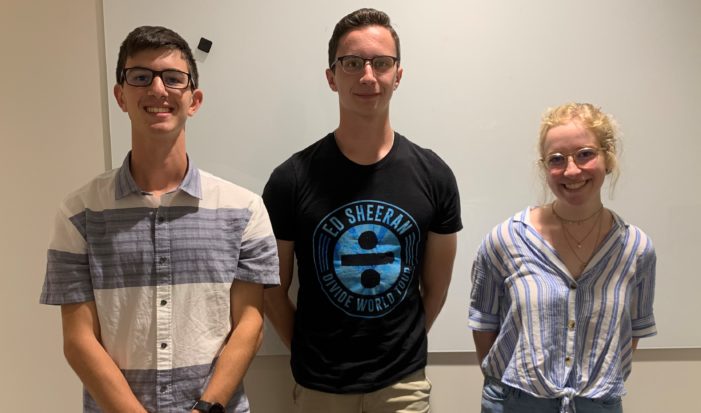 Three Clarkston High School seniors and academic standouts were recently named National Merit Scholarship semifinalists.
Madison Dryden, Timothy O’Daniel and Nathan Sesti are three of about 16,000 semifinalists who now have an opportunity to continue in the competition for some 7,600 scholarships worth more than $31 million that will be awarded in the spring
“I mean, really, it’s just an honor,” said Sesti, who hopes to attend MIT next year to study computer science and math. “I mean, not a lot of students are selected, so I was honestly surprised when I found out. I’m really excited about it and it will definitely help a little bit for college. That’s exciting.”
Sesti also competes in track and cross country at Clarkston High School. He attended Independence Elementary as well.
All three went to Sashabaw Middle School and Clarkston Junior High. Dryden went to Clarkston Elementary and O’Daniel to Our Lady of the Lakes during their elementary school days.
“It’s pretty cool, actually,” O’Daniel said. “I mean, I took the PSAT and I wasn’t really expecting necessarily to get this. I didn’t have any idea how it worked. When I found out how it worked, and that I was selected, I thought that was pretty cool. And I was really hoping that I’d make it to the semifinalists, which I did.”
Away from the classroom, O’Daniel is on the school’s bowling team and is in the band, playing the mellophone in the marching band and the French horn during concert season.
Next year, O’Daniel is undecided about his academic path.
“I don’t know yet,” said O’Daniel. “I want to get into a good college and I really want to go study neuroscience. Thinking about maybe going to med school after that.”
Dryden said earning the National Merit designation means her hard work is paying off.
“Achievements in school with grades are one thing, but when you can see that all the work you’ve put in to prepare for college and prepare in school and see yourself compared against other people in the country and actually see that accomplishment and get recognized for it, it’s a very different feeling,” Dryden said. “And it’s pretty special.”
She is involved in figure skating at CHS, competing on varsity with other high schools in the area in addition to being a club figure skater, too. Dryden is also applying to MIT, as well as the University of Michigan, and looks to study aerospace engineering and astrophysics.
Over 90 percent of the semifinalists are expected to wind up as finalists, and about half of the finalists will win a National Merit Scholarship. More than 1.5 million juniors in about 21,000 high schools entered the scholarship program by taking the 2018 PSAT/National Merit Scholarship Qualifying Test.
The nationwide pool of semifinalists represents less than one percent of U.S. high school seniors.