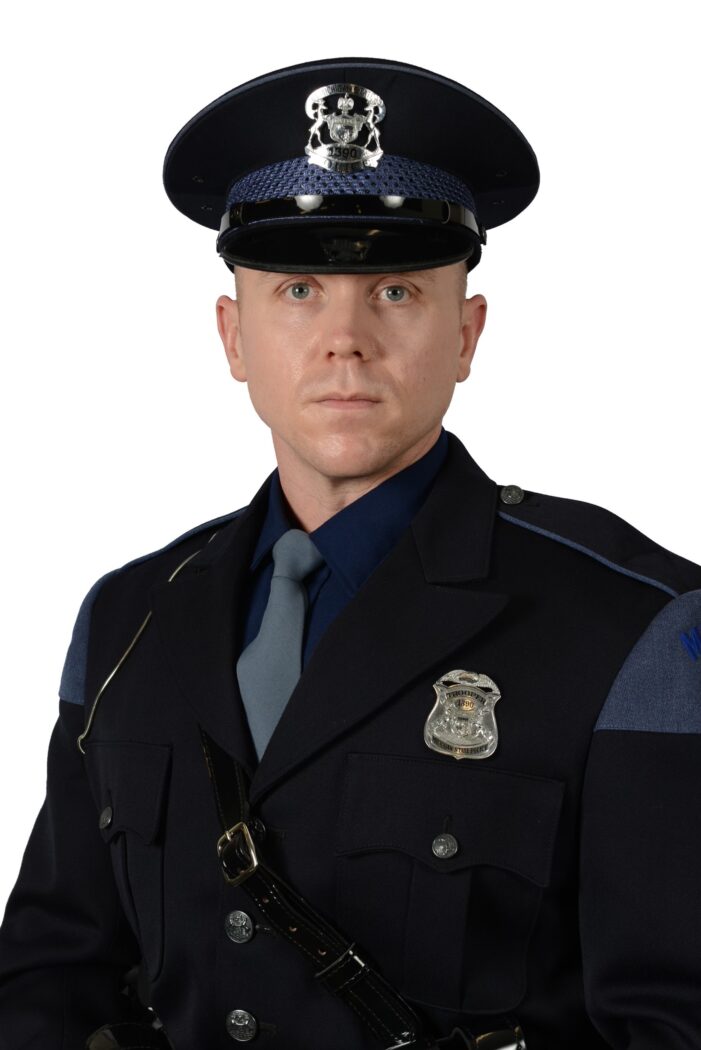 Last month, Clarkston resident Matthew Oliver began his new career as a Michigan State Police trooper, taking a step into a realm where he previously had no experience.
During a virtual graduation ceremony on March 4 in which Gov. Gretchen Whitmer was the keynote speaker, Col. Joe Gasper administered the oath of office to 55 new troopers, who then started their assignments at MSP posts across the state.
“I’m honored to recognize the 55 graduates of the 138th Trooper Recruit School as they join the ranks of the Michigan State Police and begin a career serving the people of Michigan,” said Whitmer. “Public service is both an honor and a calling, and I know that these new troopers will commit themselves to keeping our communities safe and step up to serve our state in times of need. Together, we will create a safer and more just Michigan for all.”
Oliver served 18 years in the Michigan Army National Guard with a deployment to Iraq and Afghanistan as an infantryman, and said he wanted to “continue my service to my community.
“I was unable to find a career that gave me the same satisfaction as serving in the military gave me,” said Oliver. “I had a great uncle who was a Michigan State trooper as well as an uncle who was a Michigan State trooper. I also had an uncle who was a sheriff’s deputy.”
As a Michigan State trooper, Oliver’s duties include patrolling the Tri-City area in Bay, Midland and Saginaw counties during the midnight shift to detect or prevent traffic law violations, investigate complaints of law violations, and provide a variety of related services to the general public.
Oliver said that there are definitely obstacles involved with being in law enforcement these days.
“I believe the constant challenge of law enforcement is the ever-changing dynamics of society,” he said.
That being said, Oliver did offer advice for anyone that may be looking at a career in law enforcement.
“If you are looking for a career that can challenge you mentally and physically, this is it,” said Oliver. “If anyone is transitioning from the military, I highly recommend pursuing this career field. I was struggling to find where I would fit after military service, and this was a perfect fit.
Although not originally from Clarkston, Oliver’s wife, Jessica, is. She graduated from Clarkston High School in 2003. Their children, Justin, Madalyne, and Christopher, are students of Clarkston Community Schools, and they have a daughter who is not of school age yet.
Oliver graduated from the 138th Trooper Recruit School, which began on Sept. 8, 2020, at the MSP Training Academy in Lansing. Recruits received training in firearms, water safety, defensive tactics, patrol techniques, report writing, ethics, cultural diversity and implicit bias, decision making, leadership, first aid, criminal law, crime scene processing and precision driving.
“We celebrate adding these 55 women and men to the Michigan State Police family,” said Gasper, director of the MSP. “I’m excited to see them start a rewarding career serving those who live in Michigan and visit our wonderful state.”