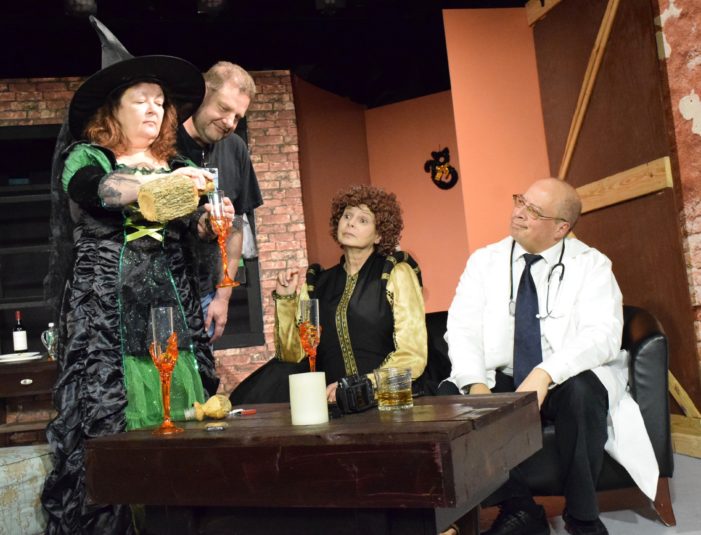 From left, Annette Swidwinski as Lauren, James Hoxsey as Phil, Linda Leath as Claire, and Phil Custodio as Ridley try out a mysterious beverage. Photo provided

BY PHIL CUSTODIO
Clarkston News Editor
The truth hurts in Clarkston Village Players’ Vino Veritas, opening this Friday on stage at Depot Theatre.
“It’s just painful,” said Linda Leath, who plays Claire in the comedy drama by David MacGregor, presented by Special Arrangement with Playscripts, Inc.
Claire’s friendships with Phil, played by James Hoxsey, and Lauren, played by Annette Swidwinski, and her relationship with husband Ridley, played by Phil Custodio, are put to the test in the play, in which they fall under the spell of a mysterious blue wine at a Halloween party.
The wine, made from the possibly poisonous skin of the South American blue dart tree frog, is said to be a tribal truth serum. And it works.
“When friends ask what’s the show is about, I just say, ‘oh, two couples take a truth serum on Halloween,’ and immediately they know where that leads,” Hoxsey said.
“The two couples drink the truth serum and hilarity and darkness ensue,” Swidwinski said.
“Yeah, all the (stuff) comes out,” Leath said.
All three actors agreed, taking a truth serum with friends in real life would be a horrible idea.
“I like to live in the fantasy that people actually like me,” Swidwinski said.
“I like to the fantasy that I actually like people,” Leath said.
“I’m not that delusional,” Swidwinski said.
Sometimes more truth would be appreciated, Hoxsey said.
“We’re very good at hiding the truth from ourselves and it results in very bad things, because it eats at your psyche. You’re trying to cover for this lie,” he said. “Like when people come up to you after the show and say, ‘you were really good up there,’ and not really mean that? I think sometimes it would be nice if somebody did say, ‘actually, you could have been a lot better,’ because if they’re lying to you about some things, then you don’t really get to try to address it. If all they’re trying to do is just make you feel better, it’s a temporary feel good, versus, yeah, you might hurt me, but by telling me the truth about something, that could make things stronger and make me a better person.”

Honesty may be the best policy, but God made little white lies for a reason, Swidwinski said.
“Sometimes the truth is less important than somebody else’s feelings,” she said. “The things we hide from ourselves, is it a lie? I mean, are we lying to ourselves?”
“And are we frustrated in our own lives, that eventually it’s going to come up in a hurtful way,” Leath asked.
“There’s so many things that you do hide, because you don’t want to hurt someone’s feelings because you really love that person. I wouldn’t want to hurt anybody by revealing my truth, because you know what, I’d be hurting myself as well.”
When CVP member Karen McClellan first read the play about a year and a half ago, she resolved to present it to the community theater for production with hopefully herself as director, which she achieved.
“It really intrigued me. I thought it was very interesting and I really wanted to direct it,” McClellan said. “It’s very different, the manner of the truth and whether or not you should tell people the truth, the things that came out with the friendships they have, and whether it was going to ruin their friendship or not.”
“Like really good comedy is a lot of times, it’s based in truth. It’s observational humor, as opposed to just one-liners,” Hoxsey said. “I think we don’t even know ourselves as well as we think we do. So things come out that you hide away from yourself.”
The show, which features adult themes and language, runs from Jan. 10-25. Tickets are $17 on Friday and Saturday shows at 8 p.m., Jan. 10-11, 17-18, and 24-25; and $15 on Sundays at 2 p.m., Jan. 12 and 19, as well as Saturday, Jan. 18, and 7:30 p.m. on Thursday, Jan. 23.
For tickets, call 248-425-5842 or email cvptickets@gmail.com.