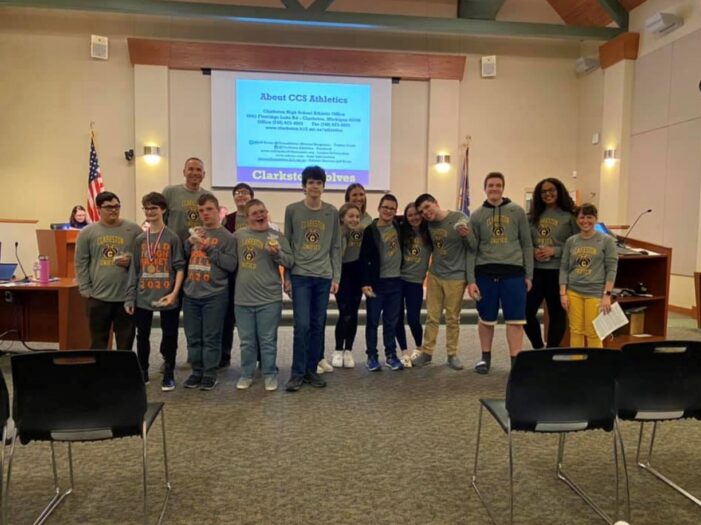 During select Clarkston High School boys basketball game nights this winter season, the entertainment between the JV and varsity games was “sports in its truest form,” according to Clarkston Athletic Director Jeff Kosin.
The Clarkston Unified Basketball team, made up of athletes with special needs, played four home games and two away games in Lake Orion and Southfield.
“Unified, really it works hand in hand with Special Olympics,” said Kosin at the March 9 meeting of the Clarkston Board of Education. “We have our players and our athletes, and our athletes are out there, and there are three of those, and two players that support our athletes. No matter who scores, no matter what’s going on, everyone reacts, and everyone goes nuts. It was phenomenal.”
Kosin said he knew the season would be a hit back at the beginning of the school year.
“When we opened this up in October, I knew I wanted to do it,” said Kosin. “I didn’t have anything, though. I didn’t have a coach. I didn’t have uniforms. I didn’t have equipment. I had nothing. So I leaned on Eleanor Hallman and I said, ‘You’re gonna coach.’ And she said, ‘Absolutely. What do I need to know?’ I said, ‘Nothing. Don’t worry about it. We’ll be all set. We’ll take it on. We’ll make it happen. And we did.’”
Later that night, Kosin said he received a text from Bailey Lake Elementary Principal Glenn Gualtieri saying he wanted to help coach the team.
“We selected our team and we relied on Eleanor to kind of go through and lotto pick the kids you see in front of you today,” Kosin said. “We built a schedule where we were playing teams at home. They got a lot more cheers sometimes than our varsity, and that was good. That’s a great thing.”
Looking ahead, Kosin sees the program growing in leaps and bounds.
“We’re hoping to expand and we’re hoping to possibly create another team next year,” said Kosin. “There are other sports offered like bocce ball and flag football. I figure what better way in Clarkston to do basketball than with our Unified Basketball team.”
Hallman added the highlight of the season was seeing each player score at least one basket during a game.
Each Board of Education member received an autographed team picture at the meeting.
“Watching all of you was absolute pure joy,” said board president Kelli Horst. “We love you so much. Thank you for loving basketball, thank you for playing, and thank you for the posters. We will treasure this.”
The team’s roster included Austin Bogden, Daniel Crull, Justin Draving, Jaden Kew, Landon Kzinowek, Mitch Lyons, Mitchell Martin, Michael Stroster, Michael Vogel, and Julia Ziesmer. Partners were Sam Aris, Ashley Campbell, Kate Gualtieri, Garrett Lucas, and Brooklyn Thomas.