When the blood pressure rises, punt your next thought

I had this column all ready. It is ready to be typed. It is all there on my yellow Quill legal pad, penciled in my patented Don Rush shorthandish scrawl. It was, or is, about the hypocrisy of media coverage in regards to presidential campaigns.
I had gone through and pointed out how it is interesting that Democrat Hillary Clinton chastises her main opponent, Republican Donald Trump about:

1. Voted for the war in Iraq as a member of the legislative branch of our federal government.
2. Totally abused the women who claimed they were assaulted by her husband while he was governor of Arkansas and President of the United States.
3. Bashes private citizens for following the tax codes she and her friends in Washington, DC created.

But as I started typing I could feel and strong thumping in my chest, and my face getting read as my blood pressure started to rise. I stopped typing that column.
* * *
Then I thought, “maybe I will do something on the RTA — the ever-lovin’ Regional Transit Authority.” You know, these guys are the ones who want to provide train service between Ann Arbor and Detroit, a bigger train in Detroit and bus service in Southeastern Michigan. A 1.2 mil tax is proposed to cost $37 million dollars over the next 20 years with ZERO return for folks like us up here in the sticks.
Folks in Wayne, Oakland, Macomb and Washtenaw counties will vote on this issue at the November presidential election. Guess what, even if every one in Oakland County votes ‘no’, but the issues passes in Wayne, Macomb and Washtenaw counties, we still get stuck with the bill.
Nope. Can’t write on that either. Blood pressure again.
* * *

Wrote Finley, “A lot of conspiracy theories cross my desk. I don’t spend a whole lot of time considering them. Instead, I tend to believe things are as they seem, and that there’s not an unseen hand moving about the chess pieces. But I’m starting to seriously believe that Donald Trump got into the presidential race to hand the White House to Hillary Clinton and to destroy the Republican Party.”
No, thought I, nobody would get this far into something, just to lose . . . then the Trumpster went off on Hillary saying she was not mentally stable and wasn’t faithful to her husband. Good gosh almighty, he is trying to lose, Finley and we are living in Bizarro World! 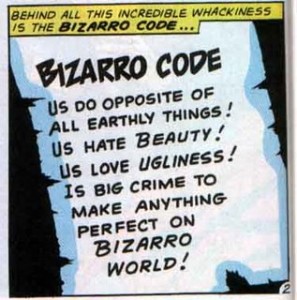 ARRGGGG! How many days until this schmackin’ frackin’ election is over? Thirty-something?
Relax, Donald. Blood pressure. Oooohmmmmmm.
* * *
No, what I need to write about is something light. Something fluffy. Something to make me smile — because, remember this folks: It is always about me, you guys and gals are just along for the ride.
I received an e-mail with pictures of signs found north of the border. The subject line: Why Canada is Great.
* A sign in North Vancouver states: Attention Dog Guardians: Pick up after your dogs. Thank you. Attention Dogs: Grrrr, bark, woof. Good dog.
* A billboard for a Saskatoon restaurant shows a scenic picture of a majestic moose near shimmering water with these words: There’s plenty of room for all God’s creatures — right next to the mashed potatoes.
* A sign in a Canadian drinking establishment: Do not drop cigarette ends on the floor as they burn the hands and knees of customers when they leave.
* Same bar, different sign: NOTICE — Public Bar. Our public bar is presently not open because it is closed. Manager.
* At a self-serve gas station the cost for a liter of regular was: Arm; for Plus: Leg and for Premium: First Born.
* And, finally, out by a beach somewhere there’s a big yellow sign with big black letters. CAUTION: This sign has SHARP EDGES. Do not touch the edge of this sign — also, the bridge is out ahead.
* * *
I (okay, we) need to find more humor in life. This election is sucking the fun outta’ things. Send me your funnies, pictures, jokes — whatever. Make me smile! (I will even give you credit.) Send them to Don@ShermanPublications.org.

When the blood pressure rises, punt your next thought added by Don Rush on October 5, 2016
View all posts by Don Rush →