BY WENDI REARDON Clarkston News Sports Writer It was a close match for freshman Luke Baylis on Singles No. 2 court, but he was ready to prevail in his long three sets against Troy’s Brennan Cimpeanu. “It was the two of the best freshman in the state going head to head,” said Clarkston Boys Varsity […]

BY WENDI REARDON PRICE Clarkston News Sports Writer A new sport has emerged in Clarkston and the Lady Wolves are excited for their first fall on the field hockey team and for their first home game this Thursday against Marian. “The girls are fired up,” said Blake Anderson, head coach for the club sport. […]

Come back against Wildcats

BY WENDI REARDON PRICE Clarkston News Sports Writer The gridiron heroes bounced back from their first loss to close the game against Oxford last Friday, 38-7. “We always talk about you want to win but you want to get better,” said Kurt Richardson, long-time head coach for Clarkston Varsity Football. “We gave one away (against […]

Orange Out for kids with cancer 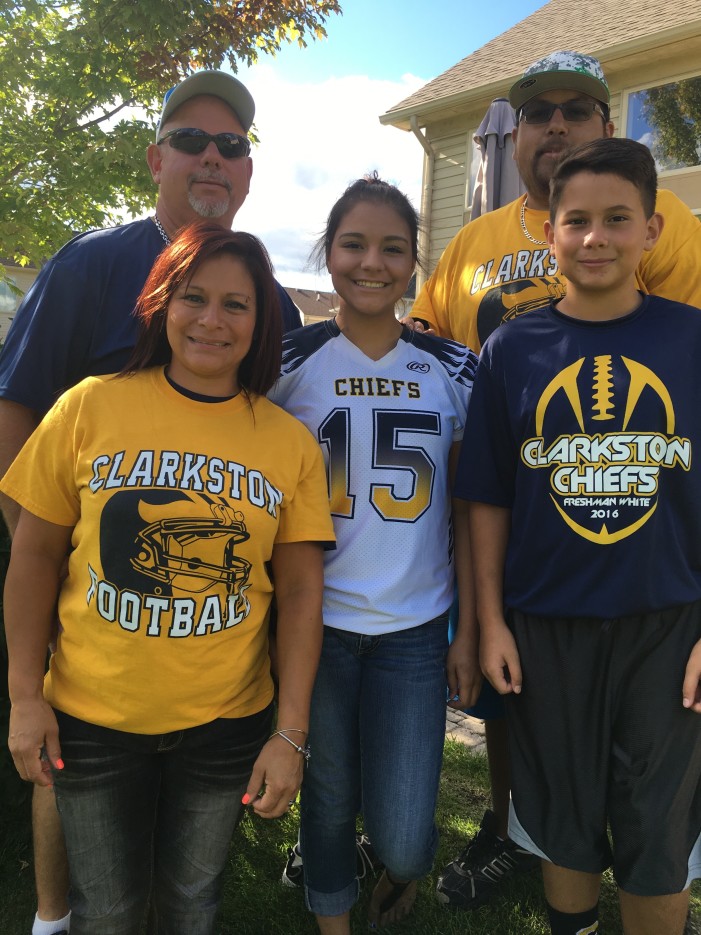 BY WENDI REARDON PRICE Clarkston News Sports Writer Jasmine Holler watched from the sidelines as her brother, Evan, intercepted Oxford’s pass and ran it into the Wildcats territory during the Chiefs Freshman White game at Clarkston Junior High School on Saturday. He was happy she was there – his sister just finished six weeks […]

Next for Wolves: home opener against Oxford

The gridiron heroes have their sights set on getting their first win in the OAA Red as they host Oxford this Friday in their home opener. The Clarkston Varsity Football team lost their league opener to Southfield Art & Technology last Friday in overtime, 24-18. Clarkston opened with a 42-yard touchdown run from junior […]

The Lady Wolves opened the season against a tough opponent last Thursday as they lost to Rochester Adams, 137-49. “Adams is tough, we knew that going into it,” said Amber Miller, head coach for Clarkston Girls Swim & Dive team. “We have a very young team. It was great to see where they are at […]

Athletes of the Week: Top at weekend invite

By two points the Clarkston Boys Varsity Tennis team edged Traverse City Central from winning the Traverse City Invitational. The boys finished last year as runners up and for their second visit they won the tournament. Players on the Singles court continued their dominance and swept all four flights with Alex Matisse on Singles No.1; […]

BY WENDI REARDON Clarkston News Sports Writer Clarkston’s gridiron heroes are counting down to their season opener as they prepare for Lapeer at University of Michigan for Battle of the Big House on Friday, 7 p.m. “It’s going to be a great experience for the kids,” said Kurt Richardson, head coach for Clarkston […]